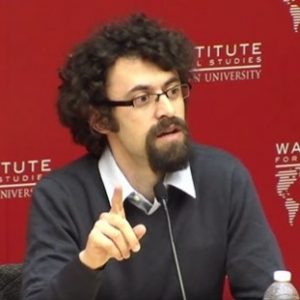 Alex Gourevitch is Assistant Professor of Political Science at Brown University. Prior to joining Brown University, Alex Gourevitch was a professor of political science at McMaster University, a Post-Doctoral Research Associate at Brown’s Political Theory Project, and a Harvard College Fellow. He writes on a number of issues in the history of political thought and on normative political economy. His book, From Slavery to the Cooperative Commonwealth: Labor and Republican Liberty in the Nineteenth Century was recently published by Cambridge University Press, and he is currently working on a book on the political ethics of the strike. He regularly writes for magazines like Jacobin, Dissent, and Salon and is the co-editor of a contemporary politics blog The Current Moment (www.thecurrentmoment.wordpress.com).

Is there a radical politics of virtue?

Alex Gourevitch / July 10, 2013 / 0
In today’s commercial republics, the “commercial” and the “republican” seem to be at odds. Commerce generates vast inequalities of wealth; the labor market generates overwork, underemployment, and precariousness; citizens are subject to myriad forms of coercion, surveillance and discipline. Yet a republic is supposed to uphold the freedom and equality of its citizens. Worse yet, the tradition of ‘republican’ political thinking seems to have only extreme answers available to it. In the name of protecting the virtue of its citizens, republicanism has often been hostile to the very idea of commerce. The production and accumulation of wealth, the enjoyment of luxury and leisure, are seen as corrupting private pursuits, drawing citizens away from public life and fracturing any sense of shared commitment to equality and the common good. The only solution is radical regulation. Impose severe restrictions on the production and consumption of wealth, eliminate wealth and poverty, and impose relative uniformity in economic activity. This was the classical republican solution, and neo-republicans have not done much to dislodge this view. As Jessica Kimpell put it in a previous post, “it would seem that contemporary thinkers would be even more vulnerable to this problem than classical republicans.”

‘An Iron Chain of Bondage’: Lessons from the Knights of Labor

Alex Gourevitch / November 29, 2012 / 0
As modern workers, we have much to learn from the rich tradition of labour republicanism in America. The second piece in our Democratic Wealth series, hosted with OurKingdom. In 1828, William Heighton, a radical shoemaker, announced to a group of Philadelphia labourers that the wage-labour system “is…an iron chain of bondage. A system of unjust abstraction, oppression, and legal fraud, by which the most useful classes of society are drained of their wealth, and consigned over to eternal toil and never-ending slavery.” Heighton had just created the first formal political party of workers in modern history, the Working Men’s Party of Philadelphia.

‘An Iron Chain of Bondage’: Lessons from the Knights of Labor