In Measuring Peace, Professor Richard Caplan of the University of Oxford has written an insightful guide for students and practitioners of peace. The book will help those who want to understand the fundamental principles and existing practices of how to assess peace while at the same time outlining some critical political constraints. Caplan provides a succinct and clear analysis of key approaches to peace measurements, their weaknesses and ways to move forward. Due to its accessibility and policy relevance, the book also stands out among other publications that have sought to evaluate and grapple with the question of how to judge the quality of existing peace.

The key aim of the book is to give peacebuilders a ‘compass’ to navigate the post-war peace landscape and to measure ‘stable’ peace, defined as ‘a condition in which the recurrence of civil war is thought to be unlikely’. Caplan succeeds in outlining basic principles of how to measure the quality of peace (rather than what to measure). In showing how organisations such as the UN have applied context specific benchmarking successfully, he further argues that it is crucial to understand how a conflict or peace has been changing over time and space. The question for Caplan is not what peace requires to survive but what this peace requires. As peace is elastic and best conceptualised as a continuum, it will vary. Regional scholars and advocates of interdisciplinarity can rejoice.

The structured and lucid manner in which Caplan offers his arguments is equally refreshing. Without compromising on contextual complexity of the studied cases, he has managed to offer a thoroughly researched analysis backed by the knowledge of peace practitioners such as heads of UN missions,  Organization for Security and Cooperation in Europe’s staff and army personnel whom he interviewed on their work in countries such as Afghanistan, Bosnia, Burundi, Sierra Leone and many others. Using real-world examples, he demonstrates that ethnographic methods in acquiring data, matched with local knowledge and deep contextualised conflict analysis give the best available assessment of peace.

Caplan joins a canon of critical scholarship in peacebuilding that has stressed the role of local actors and advocated for an equitable integration of local knowledge with external expertise in assessments of peace. Severine Autesserre’s Peaceland (2014) about external actors in peacebuilding in the Democratic Republic Congo and Roger MacGinty’s work (2014) on everyday measures of peace are two among these. Caplan’s key message about the need to stop using the same toolbox for every case finds support further afield in transitional justice studies that have been calling for this for over a decade (e.g. Shaw et al. 2010). But this book differs in its practical application as it is directly speaking to those embarking on peacebuilding missions and seeking to understand the pros and cons of different measurement tools. This is the key contribution of Caplan’s work.

Despite its many assets, Measuring Peace does underplay how people come together in the aftermath of large-scale violence and how such human interactions can be measured. In other words, reconciliation between people is missing. Although Caplan introduces three key concepts that are closely related to peace – stability, security and resilience – reconciliation is mentioned only marginally with respect to ‘comprehensive peace’. Yet just like peace, reconciliation is an essentially contested concept and one closely related to the topic of the book. As a field that looks at how societies recovering from conflict deal with past violence, reconciliation is closely related to what Caplan calls ‘stable peace’ – i.e. when ‘conflict becomes unlikely or unthinkable’ (see Avruch 2010). This clear conceptual overlap deserved attention.

Additionally, while Caplan appreciates how political constraints can obstruct measurements of peace, political obstacles often seem to play a much more crucial role than factored in the analysis. For example, while the utilisation of contextualised measures would be cheaper for organisations such as the UN in the long-run, it would cost more in the short-run. The immediate high price tag is hard to sell – both within the governments that sponsor the UN and to the public. As budgets are cut, simple measures are more efficacious. The ability to plan ahead is a scarce resource in peacebuilding and short-termism dominates the field, as, for example, Heads of Missions want to show results of their work within their tenure.

Despite such points of discussion, Measuring Peace is a spectacular scholarly achievement and clearly shows where academia can have a policy impact. It can serve as a useful tool in the hands of peacebuilders facing the daunting task of measuring the quality of peace. The comparative empirical evidence from countries such as Burundi, Afghanistan, Bosnia, Kosovo, Sierra Leone, Liberia and East Timor as well as organisations such as the United Nations, OSCE and the African Union can be further of interest to regional scholars interested in placing their cases onto the map of peace studies. While many of the arguments that Caplan presents are recognised by the most enlightened sectors of the UK aid sector (see reviews of the International Commission for Assessing Impact, for example), it seems that in the case of how to measure peace, practice will be catching up with scholarship.

Jessie Barton Hronesova is an ESRC postdoctoral research fellow at the Oxford Department for International Development, working on victimhood and compensation in post-war Bosnia-Herzegovina. She has authored several studies on identity politics (including Post-War Ethno-National Identities of Young People in Bosnia and Herzegovina, 2012) and retributive transitional justice in several academic journals. Jessie previously worked at the International Criminal Tribunal for the former Yugoslavia, the Organization for Security and Cooperation in Europe in Bosnia and Herzegovina, and the Balkan Investigative Reporting Network in Sarajevo and Belgrade. Jessie holds a DPhil from the University of Oxford in politics (St Antony’s College, 2017).

What Mubarak’s acquittal means for Egypt 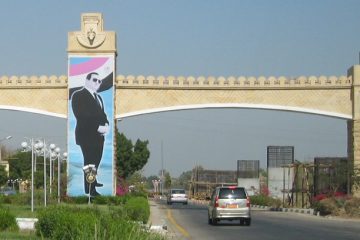