Christopher Croke is a graduate student at St John's, Oxford. 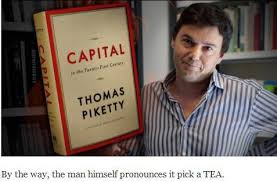 Christopher Croke / April 29, 2014 / 0
What do we really know about how wealth and income have evolved since the 18th century and what lessons can we take from that for centuries to come? For Thomas Piketty in Capital in the Twenty-First Century, one lesson is clear: inequality is self-generating within a capitalist system. Capital, a magnificent 650-page work, first appeared in France late last year and already looms, in Paul Krugman’s eyes, as ‘‘the most important economics book of the year — and maybe of the decade’’. It is important because inequality is emerging as what Barack Obama recently called ‘‘the defining challenge of our time’’. Piketty, whose work on income inequality helped inspire the Occupy Wall Street movement, is particularly well placed to answer these questions. He is a bit of a strange creature in modern economics: as much an economic historian and archeologist as a number-crunching theorist. An academic at one of France’s elite grandes ecoles, Piketty has spent the past 20 years not only seeking to come to grips with economic inequality but also to make his conclusions digestible for public consumption. After a period at the top American universities in the 1990s, he returned to France convinced American economics was infused with a ‘‘childish passion for mathematics’’ and was merely a forum ‘‘for purely theoretical and often highly ideological speculation … preoccupied with petty mathematical problems of interest only to themselves’’. In Capital, Piketty has surely avoided that.