Marius Ostrowski is a DPhil student in Politics and Examination Fellow at All Souls College, Oxford. Marius' research focus is on the legitimacy of political institutions, and my current project is exploring new models of federalism and community identification. His wider work covers an eclectic range of interests, including: political economy and institutional theory; European party systems and political ideologies; political realism, agonism, and radical democracy; and the philosophy of Friedrich Nietzsche, Martin Heidegger, Michel Foucault, and Wendy Brown. You can follow Marius on Twitter Follow @mariusostrowski

Scotland: whoever wins, the public loses

Marius Ostrowski / September 16, 2014 / 0
The result of the referendum on 18 September is very uncertain, but its effects have already been felt. Whichever side wins, and whichever path the Scottish people chooses, the real loser of the long referendum campaign has been the quality of public debate, both in Scotland and south of the border. This is not meant as a trivial slight at any irrationality on the part of Scottish voters, or excessive rambunctiousness in the public demeanour of partisans of ‘Yes Scotland’ or ‘Better Together’. If anything, it is to be applauded that the debate has galvanised such high levels of engagement among the Scottish public, culminating in an expected turnout for the referendum of as much as 80%. Instead, it is more a comment that in the supposed contest between ‘head’ and ‘heart’ reasons for which way to vote, it has generally been the very worst aspects of both that have prevailed over their better, and more useful, fellow-arguments. The debate over Scotland’s future has, especially recently, served up the incongruous (and unromantic) image of a nation of ‘bean-counters’ basing its decision about independence on the expected profitability of either outcome, yet calculating this expectation (on either side) off the back of political and economic assumptions that resemble nothing so much as declarations of blind fear or faith. 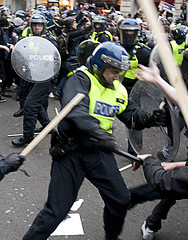 Marius Ostrowski / March 7, 2012 / 1
The findings that have recently started to emerge from enquiries into the riots that tore through cities across England in early August 2011 paint a picture of systematic disadvantage, ingrained tensions, and radical disjunction between societal groups. Though it has proved impossible to pin down any single unifying cause for this undercurrent of societal disquiet, there is a strong implication that in the absence of concrete policy proposals to mitigate the riots’ causes and effects similar events are likely to take place again — possibly even in the near future. Though at the moment it is too early to provide much more than a diagnosis of ‘what went wrong’, I believe that the prevailing narratives about the riots have ignored …