“When you kill innocent children – innocent babies – babies – little babies with a chemical gas that is so lethal, people were shocked to hear what gas it was, that crosses many, many lines. Beyond a red line, many, many lines,” Trump said when asked about Tuesday’s chemical weapons attack in Syria that killed some 80 civilians and injured many more. Thursday night he swiftly followed through with his remarks, launching missile strikes on Shayrat airfield in Syria, where the attack is suspected to have originated.

Commentators have been quick to point out Trump’s remarkable U-turn on Syria. From his ‘America First’ rhetoric, to his cosying up to Putin and repeated statements that he thinks ‘many very bad things will happen’ if you attack Syria, very little prepared us for his “call on all civilised nations to join us in seeking to end the slaughter and bloodshed in Syria.” The about face occurred after just seventy-seven days in office.

Yes, he had criticized Obama for not following through with the use of force on the ’red line‘ he set when Assad used chemical weapons in 2013, but mainly because he thought it indicated weakness. Trump always prioritized the fight against terrorism in Syria and thought little of overthrowing Assad.

Shortly after Trump’s election, I wrote a post on this blog, speculating about Trumps’ impact on International Relations. Like other scholars, I wondered whether international institutions could tame Trump and called on analysts to spend more time considering the importance of leadership styles. Trump’s U-turn on Assad (which is far from the only U-turn he has made during his short-time in office) invites further analysis of these points.

While it was predictably condemned by Russia, Syria and Iran—all claiming a violation of Syria’s sovereignty—Trump’s reaction generated bi-partisan applause domestically, despite some criticism for not involving Congress. Internationally, key partners such as France, Germany, the UK and Canada called it an ‘understandable’ or ‘just’ response that shows that the use of chemical weapons is ‘unacceptable’. These reactions indicate that many consider Trump’s missile strikes to be a legitimate response to the use of chemical weapons. As Rex Tillerson, Trump’s Secretary of State, argued, if the international community had merely condemned the use of chemical weapons but not responded to it, this would have risked normalizing their use.

Yet, whether this is a victory for international institutions and law is an entirely different question. Yes, the United Nations Security Council was consulted, but attempts to pass a resolution predictably failed due to differences between the US and Russia. While some have argued that a limited use of force to discourage future chemical weapons use can be legal, most scholars regard the strikes as unlawful. As Carsten Stahn writes, the ‘responsibility to protect’ is not a ‘responsibility to punish’. This is particularly true in the absence of a UN mandate.

So, the record here is mixed. Any final verdict will probably depend on whether there are further strikes from the U.S., upon Russia’s and Syria’s reactions, and particularly whether the strikes can be shown to increase or decrease the levels of violence and acts of barbarism from Assad.

The unpredictability of Trump’s next move

What causes real concern is Trump’s erratic decision-making process. He takes pride in pitting advisors against each other and in having a flexible decision-making style. But, so far, this has meant that Trump’s foreign policy decisions are a string of ‘spur-of-the-moment’ decisions, which render his previous statements meaningless. Recall that Trump has already angered China by speaking to Taiwan’s President first and not committing to the ‘One China’ policy, only to backtrack a few weeks later. Previous praise for Russia suddenly also turned into criticism of Russian actions in Ukraine and Crimea.

And now the U-turn on Syria.

I must say, as someone who found most of Trump’s campaign promises misguided, I’m quite relieved that he doesn’t follow through with everything he says. And I suspect that I am not alone in this. Moreover, most foreign leaders seem to take what Trump says with a grain of salt, so that some of his more provocative statements or actions (like the hand-shake debacle) have not caused major problems – yet. But, Trump’s ‘spur-of-the-moment’ decisions have also rendered his words somewhat meaningless. And this is risky. In the absence of a world government, it is credible commitments that give some order to international relations, making decisions more predictable and facilitating cooperation. If today’s word (or ‘deal’) is worth nothing tomorrow, then, at the very best, others will dismiss most of what Trump says.

But this decision-making style could also frustrate and anger other countries. We don’t really want to speculate about what happens then. So, it’s time for Trump to show us that he really knows the ‘Art of the Deal’. It’s time to take his very own criticism of Obama’s ‘blank threat’ of a ‘red line’ to heart and to stop saying ‘blank words’. It’s time to find a more consistent policy agenda. And let’s hope it will be one that improves rather than erodes international relations.

Brexit: Yes, you will suffer as well

NATO Should Adopt a New Approach to Energy Security 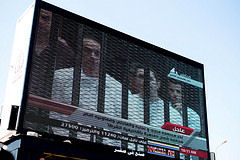