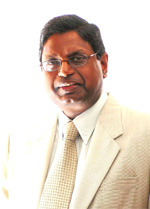 Jonathan D. James is a researcher and writer on media, religion, and culture. His research interests include cultural globalization, the social effects of new media, new religious movements, indigenization, diaspora Asians in the West, and the image industry in Asia.

With an early education in Singapore, and later trained to be a television producer in the USA, Jonathan D. James is currently an adjunct lecturer at Edith Cowan University, Perth, and well known in the Asia-Pacific region as a consultant, lecturer, and guest speaker. His articles have appeared in refereed journals in Australia, the UK, and North America, including The Journal of Religion and Popular Culture, and Studies in World Christianity and Continuum: Journal of Media and Culture.

Widely traveled in Asia, North America, and the Pacific, Jonathan D. James is the author of McDonaldisation, Masala McGospel and Om Economics: Televangelism in Contemporary India (SAGE, 2010) and the editor of The Internet and the Google Age (2014).

Jonathan James / January 4, 2017 /
When Hillary Clinton won the nomination as the Democratic Party’s presidential candidate in July 2016, she celebrated her victory speech with words that foreshadowed her campaign message: Tonight, we’ve reached a milestone in our nation’s march toward a more perfect union: the first time that a major party has nominated a woman for president…When any barrier falls in America, for anyone, it clears the way for everyone. When there are no ceilings, the sky’s the limit. In this exuberant declaration, Clinton introduced the image of the glass ceiling which spoke of a female president who would pave the way for not just her success but the success of all female Americans. This focus on women in America is closely linked …