Anette Idler summarizes some of the findings from her new book Borderland Battles, which reveals how violent non-state groups compete for territorial control, co-operate in illicit cross-border activities and replace the state in exerting governance functions in borderlands.

Borderlands are like a magnifying glass on some of the most entrenched security challenges of the world. In unstable regions, border areas attract violent non-state groups ranging from rebels and paramilitaries to criminal organisations who exploit their neglect by central governments. These groups compete for territorial control, cooperate in illicit cross-border activities, and substitute for the governance functions usually associated with the state.

Studying the Colombian borderlands where armed conflict and organised crime converge demonstrates that the gap between state-centric views on borderlines and the transnational realities at the margins turn borderlands in vulnerable regions into extreme cases of complex security dynamics. State-centric views that stop at the borderline have shaped security policies towards the Colombia-Ecuador and Colombia-Venezuela borders. However, a transnational borderland lens demonstrates that violent non-state groups have operated and interacted with each other in these spaces across the borders. Indeed, oftentimes, these interactions follow the logic of transnational illicit flows, rather than the nationally-bounded Colombian armed conflict. This can be seen when contextualizing them with the spatial distribution of the various cocaine supply chains stages and interconnected forms of transnational organized crime. Together with socio-economic and cultural conditions that vary along and across the borders, the logic of these illicit cross-border flows informs the groups’ motives for cooperation, which in turn shape their interactions.

In such spaces, local communities are exposed to multiple insecurities that arise from these interactions. In order to trace systematically how interactions among violent non-state groups influence people’s security I theorize behavioural patterns among violent non-state groups as various forms of non-state order. Accordingly, a wide range of different types of violent non-state group interactions fall into three clusters: the “enmity” cluster in which groups fight each other; the “rivalry” cluster, comprising unstable short-term arrangements among groups with unpredictable outbreaks of violence; and the “friendship” cluster that consists of relatively stable long-term arrangements. These clusters emerge from distinct distrust-reducing mechanisms employed by the groups. To capture the multiple facets of insecurity that emerge in the context of these three clusters, I use the analytical lens of citizen security. This lens accounts for both observed and perceived insecurity, and for repercussions on the state-society relationship. It highlights why and how specific violent non-state group interactions are conducive to distinct security outcomes, namely violence, the erosion of the social fabric, and shadow citizenship.

In the “Enmity” cluster then, violent non-state groups do not have any arrangement with each other. Embedded in general mistrust, the groups engage in combat or armed disputes. Community members experience or expect to experience physical violence, but can partly adapt behaviour to the rules imposed by the opposing parties to maximize chances for survival. Geography and the modus operandi of the groups involved influence the extent to which communities have clarity on behavioural rules. During periods of tense calm in between violent clashes, the anticipation of an outbreak of violence fuels perceptions of insecurity. The transnationality of borderlands makes these spaces prone to impunity, lowering the threshold for violent non-state groups to resort to violence.

In the “Rivalry” cluster, violent non-state groups engage in unstable short-term arrangements with each other. These arrangements cluster at illicit business hubs, including at strategic nodes where various illicit flows coalesce, and at starting points of international trafficking routes. In such contexts of inter-group mistrust, community members are exposed to selective killings carried out by violent non-state groups to pre-empt or retaliate cheating or betrayal. This engenders a constant presentiment of danger. General mistrust and uncertainty erodes the community’s social fabric. Depending on the specific type of arrangement, community members can adapt their behaviour to various degrees to the logics of illicit economies or employ avoidance strategies to minimize exposure to violence. Impunity across the border conceals violence against those who are considered obstacles to the illicit business.

Finally, in the “Friendship” cluster, violent non-state groups engage in relatively stable long-term arrangements with each other. They coexist or ally on the same territory or one group dominates and engages in stable interactions at the margins of that territory. These groups complement each other in assuming governance functions. Depending on the specific arrangement type, community members have reasonable certainty about the prevailing rules, and on how to avoid exposure to violence. When locals consent to the groups as governance providers, shadow citizenship and shadow citizen security arise. In such situations, security emerges from a mutually reinforcing relationship between violent non-state groups and the community in which armed actors provide public goods and services, and define the rules of appropriate behaviour, while community members socially recognize their illicit authority. If shadow citizenship extends across the borderline, the transnationality disguises the armed actors’ illicit authority.

Overall, borderlands in vulnerable regions magnify these security challenges of violence, crime, and governance that exist across the globe more broadly. This is because, in vulnerable regions, the transnationality of borderlands and their distance from state centres produce a “border effect”, the confluence of weak state governance, a low-risk/high-opportunity environment, and the proneness to impunity. The border effect influences security in four ways: as a facilitator, a deterrent, a magnet, and a stigmatized space. A transnational borderland lens on the security dynamics of the borderlands shared by Colombia, Ecuador, and Venezuela reveals that the border effect intensifies the various forms of insecurity that arise from the interactions among armed actors while rendering them less visible from the outside. The border effect holds regardless of asymmetries in border security policies and of country-specific historical and cultural contexts in the respective border zones.

These findings have significant implications for security dynamics more broadly. In particular, they help develop ‘second-best’ policy interventions that target those security challenges arising from violent non-state groups that are mitigated most effectively. In contexts of “Enmity” civilian protection is crucial; in contexts of “Rivalry”, strengthening the social fabric of communities and reducing interpersonal mistrust needs to be prioritized; and in contexts of “Friendship” consolidating the state-society relationship by enhancing the state’s legitimacy in the eyes of local communities is essential. Regarding the border effect, policies must be “border-sensitive” to be effective. That is, they need to start from a transnational borderland lens to address the logic of illicit flows in armed conflict, rather than focusing on national borderlines only.

Dr Annette Idler is Director of Studies at the Changing Character of War Programme, Pembroke College, and Senior Research Fellow at the Department of Politics and International Relations, University of Oxford. She is also Research Associate at the Centre on Conflict, Development and Peacebuilding, Graduate Institute Geneva. Her work focuses on the links between conflict, transnational organised crime and security, and the role that violent non-state groups play in these dynamics. She has carried out extensive fieldwork in the war-torn border areas of Colombia and neighboring countries.

Democratic Legitimacy and Political Identity in Belgium, Switzerland and the European Union 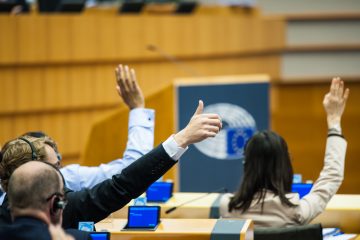