Brexit has weakened populists on the continent? This is wishful thinking. No longer willing to leave the EU, instead populists are determined to take it over.

Brexit is a moving target. Each time we think we have a deal, the British House of Commons decides to re-think. It’s like the famous passage from T.S. Eliot: “Time yet for a hundred indecisions/And for a hundred visions and revisions,/ Before taking a toast and tea.”

Boris Johnson expected the Parliament to approve the exit deal he reached with the EU. Instead, the Parliament voted for an amendment tabled by a Tory MP, Sir Oliver Letwin. The amendment withholds approval of the deal, until the legislation to enact it is safely passed – a move that triggers the “Benn Act” and forces the Prime Minister to request a further postponement of Brexit until 31 January. You need to be a passionate follower of the British parliamentary saga to understand the exact meaning of this, but T.S. Eliot’s lines grasp the essence of it. Johnson insisted that he would press ahead with tabling Brexit legislation in the days to come, but in a parliament where even Tory MPs do not trust their own Prime Minister, a straight-forward outcome is clearly impossible. This speaks volumes about the current state of parliamentary democracy, political parties, and professional politicians in the UK, but I fear that the situation on the Continent is not much healthier in this respect.

This begs a question regarding the EU’s capacity to face the fall-out caused by Brexit. For the last three years we have been told by politicians that Brexit is chiefly the UK’s problem, but in reality the EU and the UK will remain inter-connected, forever sharing the burdens of irresponsible politics. What is the expected cost of Brexit for the EU?

The most obvious cost is uncertainty, to which it is hard to attach a price tag. The horror movie called Brexit has only just started and it will last for many years, causing high anxiety. The agreed exit deal is not a trade deal. Negotiations regarding the latter are still to begin and they are going to be contentious and painful. And then we have to address the other 20,000 or so European laws the UK was part of, not to mention 750 international agreements with non-EU countries. Mutual security arrangements are also up in the air. All these successive stages of negotiations will have tangible costs, but the intangible costs are likely to be greater.

It is difficult to assess the costs of prolonged apprehension, if not fear, amongst businesses and families dependent on cross-Channel exchanges. I am thinking especially about one million of my Polish co-nationals who have settled in the UK after 2004. Security is said to have no price, and it is likely to be affected by Brexit. Think about the alliance of Trump, Erdogan and Johnson within NATO or about intelligence communication tracing terrorists and criminals. And what about the unspecified damage to Europe’s education and culture? Most successful European universities and publishers now have bases in the United Kingdom and numerous Europeans are dependent on them. Can Europe’s culture flourish with British galleries, museums or operas facing hurdles to the ongoing pan-European projects?

Probably the Brits are likely to suffer more than Europeans, but overall statistics ignore personal dramas. Besides, I have a feeling that the Brits may prove more resilient than ordinary Europeans in shouldering the costs of Brexit. After all, the Germans, Poles or Italians were not asked to cast a vote regarding this new division of the continent. They don’t own the Brexit project in the way the Brits do.

As always, the costs of Brexit will not be distributed equally within the EU, creating further conflicts within and across individual states. This will only fuel nationalism across the continent. We will see more “patriots” rewriting national histories, parading under national flags and sponsoring national culture. The price of this nationalism for the EU is again difficult to measure. The ironic implication of Brexit could be another wall in Europe erected three short decades after the fall of the Berlin Wall.

Little to look forward to

What are the benefits of Brexit for the EU? My answer is simple: there are none. Brexit will not solve any of the current EU’s problems; it will only add new ones, mentioned above. Brexit will not resolve the Euro-zone’s difficulties in reducing debt and generating growth. It will not ease migratory pressures. It will not make Russia, Turkey or China less obstinate vis-à-vis the EU. It will not address the differences between Macron and Merkel. It will not make EU institutions more democratic and transparent. We Europeans will have to address all these problems ourselves, with reduced economic weight and shaken political confidence.

I often hear that Brexit has weakened populists on the continent; they no longer advocate leaving the EU. I fear that this is wishful thinking. Let’s not forget who won the recent European elections in such key countries as France (Le Pen), Poland (Kaczynski) or Italy (Salvini). Populists are no longer willing to leave the EU; instead they are determined to take it over. They may not hold the majority of seats in the European Parliament, but they are managing to define the European narrative on such issues as migration or the rule of law. They also played a crucial role in selecting or deselecting candidates for the new European Commission, including Ursula Von der Leyen.

I often hear that Brexit would finally allow the EU to create a truly European defence. This is absurd, given that we just lost one of the two serious European armies. A new building in Brussels does not amount to European defence. Can Czech and Belgian soldiers form the core of a robust European army?

Nor can I see more stringent European regulation of the financial sector after neo-liberal Britain leaves the single market. Numerous European governments are trying to charm London-based billionaires to move to their countries by offering tax exemptions. This will be an economic race to the bottom, not to the top. We will see more tax loopholes and protectionism on the one hand, and bankruptcies as well as precariat on the other.

The idea that the EU will become more coherent after Brexit is not convincing either. It’s true that so far all 27 have stood firmly behind the key negotiator, Michel Barnier. However, real negotiations about trade, agriculture, competition or intellectual property have not yet begun. The EU budget without the UK contribution will also be difficult to square. And there are numerous structural problems caused by Brexit.

Germany’s relative size and power will augment once again after the British departure, causing the usual anxieties. EU members who are not part of the Euro-zone will be significantly weakened after Brexit. Pragmatists within the EU will also lose vis-à-vis idealists, the latter pushing for federal centralized solutions whilst the former argue for more flexible and local ones. All these imbalances will obviously produce winners and losers. The EU institutions may find it hard to bridge the emerging cleavages and manage ensuing conflicts.

And there are always those who believe in conspiracies: Brits have always tried to prevent the Union becoming strong. Getting rid of Perfidious Albion will allow the EU to gain super-power status. This is a theory similar to the one that alleges that the EU is a vehicle of German hegemony. There is no plausible evidence for any of these conspiracies. Europe can punch above its weight in the world when it acts by example. Brexit is not the example Europe needs. It undermines rather than boosts Europe’s sex appeal.

All this does not mean that Brexit is deadly for the EU. Brexit is simply one more European problem that adds to our anxiety. It is therefore important to keep our emotions and soul-searching in check, or else we will end up like the famous hypochondriac in Woody Allen’s movie, Hannah and her Sisters. Tormented by the fear of having a deadly brain tumour, Allen’s hypochondriac gives in to his desperation and even considers suicide. When medical tests reveal that the deadly illness was only in his imagination, he experiences a brief moment of joy, soon followed by even greater desperation. What’s the point of living, if we will have to die anyway?

Perhaps such an anxiety disorder is the greatest danger emerging from Brexit. It’s one thing to criticize political blunders; another to raise doubts about the very rationale for living in a united Europe.

The original version of this article in German was published in Die Zeit on October 22, 2019. An English version was posted at openDemocracy on October 23, 2019.

Jan Zielonka is Professor of European Politics at the University of Oxford and author of Is the EU Doomed? (Polity Press, 2014) and Counter-revolution. Liberal Europe in Retreat (Oxford University Press 2018).

If women ruled the world, would it be so different? From differentialism to a focus on ideology 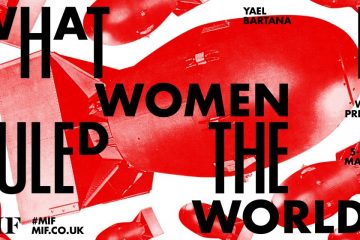