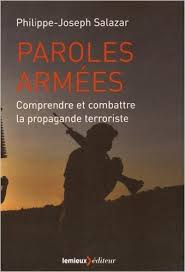 In his new book Paroles Armées (forthcoming in English translation), Philippe-Joseph Salazar, a professor of rhetoric at Cape Town University sets out to deconstruct the persuasive power of the Caliphate (otherwise known as ISIS). In the war it wages against the West, words have emerged as ‘new weapons’ (p.7). Salazar deploys his rhetorical expertise to shed light on our fundamental linguistic deficiency and how we are losing this war of words.

Confronted with a new reality that seems inconceivable to us, our reactions have mainly oscillated between horror and derision. The Islamic State has abruptly foisted upon us a bloody gruesomeness we are no longer able to contemplate. And yet, by refusing to name clearly and distinctly the terms of the conflict in order to emerge from our linguistic panic and take control of reality, the terms of the conflict inevitably elude us.

The book argues that nearly seventy years of relative peace in the Western world, and especially in Europe, have eroded our linguistic strength. Against ISIS’s mastery of rhetoric, our language inexorably emerges as weak and ineffective, stuck as it in petty debates over whether it should be designated as ‘Daesh’ or ‘Daech’. It has lost its persuasive power of the republic in arms and its revolutionary potential.

In the midst of late modernity, barbaric violence has suddenly reappeared on our screens. With its continuous stream of beheadings and bloody gruesomeness, ISIS has shattered our sanitized and managerial views of politics and war. It has marked a radical break from our modern political concepts and restored politics to its evil and sacrificial dimensions. Crucially, it has conjured a worldview Western audiences had thought long departed, one which pits believers and unbelievers in absolute confrontation and capable of rallying young people the world over.

In Al Qaeda’s metaphysics of terror, terrorism was primarily envisaged as an ethical act, designed to prompt an epiphany, conversion and paradoxically, as an extraordinary way of binding believers and unbelievers. With ISIS, the question of territory has been relocated to the forefront. Terror henceforth serves to “purify” the Levant of non-Islamic elements and in an interesting twist, even to gain those territories outside of it, which it claims as already essentially belong to it.

Its subversion does not stop there. Even the Internet, our postmodern and secular tool of choice, has been turned against us and placed in the active and resolute defence of God.

As a rhetorician, Salazar lays particular emphasis on the importance of naming with precision; ultimately those in power are those in charge of language. A new rhetoric has abruptly resurfaced which in turn requires us to redraw our own ‘mental map’ and its matching glossary (p. 56).

We need to be able to name clearly and distinctly the terms of the debate and act accordingly and resolutely. On one hand, governments claim to be at war with ISIS; on the other, they fail to translate words into action, as in the case of the female police officer who passed on confidential information to the kosher supermarket murderers and yet as a penalty, was only removed from her duties.

Long gone are the days of Saint-Just’s call to arms: “No liberty for the enemies of liberty”; our language is no longer able to galvanize the crowds or inspire throngs of young people to defend ideals.

Our passion for dialogue and self-expression, one could argue, pertain more to gesticulation and management than to action and are no match for the ISIS’s revolutionary invectives. In the belief that ‘brutality must be purged in the social rhetoric of crisis management’ (p.195), we respond with marches, flowers and slogans such as ‘I am Charlie’ or ‘Pray for Paris’. But the book shows convincingly that our stance falls lamentably short.

In fact, our language serves less to probe or elucidate than to obscure and maintain the status quo. It has not only lost its capacity for action, but serves to cultivate a pernicious state of denial. We advance not only militarily, but perhaps more importantly, linguistically disarmed. (p. 69) In an Orwellian twist, it increasingly dispenses us from having to think. It serves all the better to shield us from any real debate or reflection and to manage the effects rather than grapple with the causes.

We dismiss terrorists as either crazy or marginalized in the ill-conceived hope that they will disappear as suddenly as it appeared. Those who join the ranks of ISIS can only have been ‘brainwashed’, even when they can eloquently make their case. The jihadist has been erected the new figure of delirium par excellence and ISIS as the land of generalized insanity.

ISIS has also profoundly challenged Western practice of war. Our managerial and sanitized conception of warfare has given way to the public staging of an ethical face off. Crucially, it has marked the return of partisan politics and the unexpected resurgence of popular voluntarism, especially in the case of home-grown terrorism. Its partisans now wage urban guerrilla warfare in the name of a cause which surpasses them. It has ushered in a form of radical hostility carried out in the name of God and intent on revolutionizing the world. It is impervious to man-made codes and refutes the practice of war as we have known it in the West since the Second World War. In the words of Carl Schmitt, Politics has been reconfigured as the ‘proclamation of an incommensurable exceptionality’.

One of the most interesting aspects of Salazar’s study lies in his decoding of the seduction that ISIS exerts. The latter offers an aesthetic vision that elicits a powerful sensuous response. In their exotic novelty, its messages stupefy their audience and operate a sensory conversion on a select few.

These messages that ‘we perceive even if we do not conceive them’ stand out from the materialistic and morally deficient chaos of our daily lives and ‘open up on another world which seems removed from the repetitive, banal and mundane’ (p. 131). To some, they may offer strong values that ‘re-enchant the world’ and appeal to educated young people in search of heroism and ‘ethical adhesion.’

Confronting and possibly even engaging ISIS politically will require a linguistic upheaval including the reactivation of past concepts. We need to plumb the depths of our rhetorical past and rekindle our language’s idealistic and revolutionary spark.

Salazar’s refreshingly clear take on ISIS’s persuasive power cuts through much of the confusion and superficiality peddled by most accounts already in circulation. Beneath our linguistic weakness he diagnoses our symbolic powerlessness. As he clearly implies without however really stating it explicitly, the enemy is merely holding up a mirror to our own our own civilizational malaise.

Salazar deliberately avoids delving into whether we can realistically overcome it and whether linguistic, as well as conceptual, epiphanies are actually possible at this stage or in the future (and whether or not they are even desirable). His gaze is primarily philosophical and philological rather than political, pragmatic (or even religious), as well as Eurocentric with a strong focus on France with its long tradition of intellectual and ideological activism. Still, it is perhaps precisely this radically different angle on ISIS which sets it apart from most of the existing literature and which makes it so original and compelling: Salazar is the first to provide his reader with a sophisticated yet eminently accessible account of what gives ISIS its linguistic edge.

Audrey Borowski is a doctoral student in the History of Ideas at the University of London.