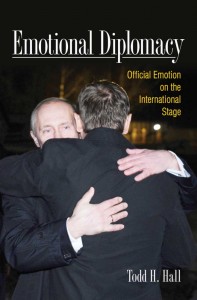 In this interview, Todd Hall comments on some of the key aspects of his most recent publication Emotional Diplomacy: Official Emotion on the International Stage. How do state representatives use emotional displays strategically and what can they achieve by applying emotion to diplomacy? How do anger, sympathy and guilt feature in international relations? It is with clarity and distinction, that Todd Hall lays out how emotions are used to influence outcomes in international relations, both in theory and in practice.

1   What makes diplomacy emotional? And, how does the employment of emotions in diplomatic relations differ from traditional forms of statecraft?

Within international relations, statecraft has traditionally been viewed as the dirty business of state actors pursuing their interests by ruthlessly negotiating relations of relative power—coercing, bribing, haggling and the like.  In my book, I look at how state actors also employ the language and actions we associate with emotions to achieve their goals. This is not to say that states actually feel emotions—indeed, how could an institution like a state be said to feel an emotion?  People may feel emotions, but states do not and cannot.  Rather, what I call emotional diplomacy involves the actors that make up a state officially and collectively deploying emotional rhetoric and behaviour on the international stage. By its nature emotional diplomacy is intentional and strategic.  It is significant because it can shape the perceptions and responses of external actors in ways that traditionally theorized statecraft cannot.  To give a brief example, if I have done wrong in the past, I cannot convince you that I have seen the error of my ways by threatening or bribing you. I can, however, seek to change your views by showing remorse.  In fact, I argue that it is precisely this logic that informed the policies of the Federal Republic of Germany towards Israel as the former sought rehabilitation within the international community in the aftermath of the Second World War.

2   Who are the main actors in emotional diplomacy and how does the dynamic between sender and receiver of emotions play out?

My book looks at the choices and behaviour of state actors—that is, those responsible for deciding and enacting a state’s foreign policy. This includes policymakers, diplomats, state and military officials, etc.  As for the dynamic between sender and receiver, it can play out in many ways.  Consider the display of remorse to which I just alluded: the target of such a display can accept it as authentic, reject it as fake, or question its sincerity in order to extract more substantive gestures.  In short, emotional diplomacy can generate its own strategic games.

3   You are concentrating on three specific emotions: anger, sympathy and guilt. Why did you decide to choose these?

Anger, sympathy, guilt—all constitute responses to significantly negative situations, be they a violation of interest and values, the distress of another, or even being the party responsible for another’s suffering.  All else equal, these are all situations more likely to involve the potential for conflict.  Moreover, all three evoke expectations for certain behaviors in response: retribution, unconditional assistance, and gestures of reparation and atonement, respectively.  Hence, all have clear implications for the behaviour of states that engage in these forms of emotional diplomacy.  By concentrating on these emotional responses I was able to focus on situations where the stakes were high—and thus states were unlikely to act frivolously—and, furthermore, there were implications for state behaviour that differed from traditional understandings of statecraft.

4   You are analyzing the empirical examples of the Taiwan Strait Crisis, the reactions of Russia and China to 9/11, and the German-Israeli relationship. Which factor best explains the choice to employ emotional diplomacy in these cases: International and domestic structural conditions or the past legacy in question that triggered anger, sympathy or guilt in the first place?

There are different things going on in each case.  In the Taiwan Strait Crisis of 1995-96, the People’s Republic of China wanted to send a message to the United States and Taiwan concerning what it would not tolerate and thus responded with a display of anger.  After 9/11, both Russia and the PRC wanted to reboot their relations with the United States and reframe their own domestic conflicts as part of the War on Terror. To do so, they reacted by expressing strong sympathy to the United States.  And in the case of the Federal Republic of Germany and Israel, the FRG wanted to rehabilitate its image within the international community by showing remorse.  While I hesitate to call the causes structural, I would say that the considerations driving these policies were primarily external.  In other words, these behaviors were less for domestic show than they were for other international actors.  Indeed, were these simply for domestic consumption, one would expect the performance to stop when policymakers and diplomats met their counterparts behind closed doors, something for which I did not find any evidence.

5   An escalating crisis between two nuclear armed powers, the terrorist attacks of 9/11 and the Holocaust are all rather extreme cases. Is diplomacy only emotional when the stakes are high? How can emotional diplomacy be measured in academic studies and what are the benefits to researchers applying the concept?

I certainly believe emotional diplomacy can take more quotidian forms as well—in fact, I think this is something deserving greater research and say as much in the conclusion of the book.   There exist a multitude of ways in which state actors could conceivably use more restrained forms of emotional rhetoric and behaviour to convey, for example, the tone of their relations with other states, ranging from strong friendship, to indifference, to even contempt. As for measuring emotional diplomacy in any given case, my stance is that one should first lay out a clear set of theoretical expectations to differentiate the strain of emotional diplomacy one is investigating (i.e. anger or guilt) from other logics of action.  With this in hand, we can then ask which better explains the observable pattern of internal deliberations, official discourse, symbolic gestures, and even the nature and timing of substantive foreign policy actions in the case in question.  To be clear, I am not claiming that state actors do not also engage in more traditionally understood forms of statecraft such as hard-nosed arm-twisting and horse-trading.  They most certainly do.  But this is not all they do, and the concept of emotional diplomacy can thus help explain behaviour that otherwise would be quite puzzling.

Hierarchy, status and international society: China and the steppe nomads

Kathrin Bachleitner is writing her DPhil at the Department of Politics and International Relations, University of Oxford.

Diplomacy, Academia, and The Threat of Irrelevance: A conversation with Tom Fletcher, author of Naked Diplomacy

Neither Cynical nor Dogmatic: The right attitude to international law