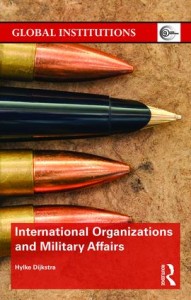 2016). This book represents the first comparative study of the politics behind the scenes at the United Nations, NATO and the European Union concerning the use of military force. It is also the result of a research project carried out at the DPIR in Oxford. DPhil candidate Dana Landau interviews him on the most pertinent questions that arise from his work.

I have a European Studies background and have studied EU institutions from my first year as an undergraduate student. For my PhD (and my first book) I looked into the role of EU institutional machinery in security and defence policy. Why did the EU member states suddenly establish security institutions in Brussels, after focusing on economic issues for 40 years? This made me really wonder whether similar institutional dynamics apply in other international organisations. So I decided to compare my findings about the EU with developments in NATO and the United Nations. The end result is this book: the first comparative analysis of the political dynamics of international organisations in military affairs.

International organisations tend to be very different in terms of history, culture and operating procedures. When walking through the buildings of the EU, NATO and the UN, you literally feel the differences. It is in the atmosphere. And yet, in terms of institutional design, there are striking similarities. Important decisions by all three organisations are taken in a ‘Council’ composed of member states. The planning of military operations is outsourced to the permanent secretariats of these organisations. Member states keep strict control over these organisations, even though there is variation in their methods. That is the interesting thing about comparative research. It allowed me to distinguish general trends from the particularities of the individual organisations.

I always find interviewing officials a very productive method of research. It allows me a glimpse of what happens behind the scenes. It makes me realise that I am talking to the people who actually wrote the Security Council resolutions, who made statements to the press, who made the decisions to use military force, who shaped the conduct of an operation. This can often be slightly surreal. There you are in a Brussels office building or a cosmopolitan New York coffee bar talking with civil servants or military officers about their experiences in conflict zones on the other side of the globe. For them their actions and decisions are part of their daily routines and they do not always seem to give that any thought. For me, it can almost be like a movie, except of course that the tragedies in conflict regions are all too real.

That was precisely one of the puzzles I started with. We are, indeed, time and again told that international organisations take ‘a life of their own’. But how can this be, I wondered, if the control by the member states is so strict? And why would member states let international organisations get away with such behaviour? They can be fooled once, but not twice. My research uncovered that there is, in fact, more to the story. First, there are really a lot of control mechanisms, formal and informal, which are often ignored by those who say that international organisations are on the loose. One needs to go into the nitty-gritty details of personnel and budgetary rules to really understand this. Or pay attention to what I called the ‘shadow bureaucracies’ in many member states, which keep a watchful eye. Second, it is almost always in someone’s interest if international organisations take a life of their own. NATO, for example, informally expanded its mandate during the Libya intervention in 2011 from the protection of civilians to the removal of Colonel Gaddafi. This was not about some NATO officials running amok. Quite to the contrary, this was strongly supported by key member states such as France, the United Kingdom and the United States against the interests of other member states!

So my book is a scholarly monograph. And yet, I think it also contains valuable lessons for practitioners. Particularly in the field of military affairs, the rotation of officials is very high. Civil servants are recruited on temporary contracts or seconded from their member states. The result is that they know very little about their own organisation or what happened five years ago. Moreover, the people in the EU have only limited knowledge of the UN and NATO, and vice versa. I therefore hope that practitioners will pick up my book to reflect on their own work and to consider best practices from the other international organisations.

I think what we need to understand is that we are currently at the high point, or just past the high point, of joint military missions. The UN has a record number of more than 107,000 uniformed deployed personnel in its peacekeeping missions. Until very recently, NATO had an operation of 140,000 troops in Afghanistan. The EU has launched 30+ civilian and military missions since 2003. Through these activities, we have learned a lot about joint military missions, their effectiveness and reasons for success or failure. We are also reminded, time and again, that peacekeeping, conflict resolution and peace building are very difficult endeavours. It requires a long commitment and I am not sure the international community will continue to uphold such a commitment. In Europe, for example, we are faced with low defence budgets as a result of the financial crisis and years of underinvestment. So can we sustain the current effort for much longer?

Yes, I am very grateful for the opportunity that the DPIR (and Nuffield College) gave me to carry out my research. The two-year fellowship allowed me to fully concentrate on this book. Without such generous research time, I would simply not have been able to complete this project. But at least as important was the research environment in Oxford. I vividly remember the multiple research seminars by inspiring colleagues which were organised on a daily basis. Many colleagues furthermore took a genuine interest in my work and, importantly, challenged me to go the extra mile. I have stayed in quite a few universities, but none of them were anything like it. I would return in a heartbeat.

Dr. Hylke Dijkstra is an Assistant Professor (with tenure) at the Department of Political Science of Maastricht University, The Netherlands. He was previously a Marie Curie Fellow at the Department of Politics and International Relations of the University of Oxford, where he was also affiliated to Nuffield College. He is the Editor-in-Chief of the peer-reviewed journal Contemporary Security Policy.

Dana Landau is a DPhil (PhD) Candidate in the Department of Politics and International Relations, as well as a student at Green Templeton College. Her DPhil project examines international normative commitments to multi-ethnicity in post-conflict Kosovo.