The single most important event to influence Kenya’s political landscape over the next five years will be the general election to be held on 4 March 2013.[i] Most importantly, the election will mark the stepping down of Kibaki, who has reached the end of his two term limit and not shown any unwillingness to relinquish power. In accordance with the new constitution, a presidential candidate must receive a solid majority of votes if he or she is to win office in the first round. Otherwise, voting enters a second round where the two most popular candidates face a run-off at the polls.

Given the widespread violence of the 2007 election, which saw about 1,500 killed and 300,000 persons displaced,[ii] both domestic and international actors are carefully watching developments in the run-up to the 2013 elections and searching for a strategy that will dodge previous pitfalls. As allegations of vote rigging surrounded ‘the worst violence since Kenya gained independence’,[iii] particular international support has been given to Kenya’s electoral commission. At the same time, however, violence is known to have marred each of Kenya’s previous multi-party elections: it is unlikely that a focus on election procedure will single-handedly reduce instability.[iv]

Three factors make the 2013 election particularly important and exacerbate the tensions that surround it. First, the power-sharing government that followed the disputed election results of 2007: by bringing a large number of political actors on-board, government action has been stalled and many of the ministerial responsibilities duplicated, leading in turn to a lack of accountability. The disruption has been most notably evidenced by ongoing failure in relocating the Internally Displaced Persons (IDPs) caused by the violence of the last elections. The presence of a power-sharing government increases the attention on the 2013 election because many politicians view the current system as unmanageable. This has, in turn, led them to start their campaigning well ahead of an (already unexpectedly delayed) election date. A longer run-in period to the election increases the extent to which campaigning politicians descend into ethnic hate speech as leaders take to paraphrasing their critics’ most offensive statements.

The second factor adding to the tension surrounding the 2013 election is that it is to be conducted under the new constitution (voted for in 2010). Implementation of the constitution has been a dangerously slow process, though there have been ‘a number of critical legislative successes passed in accordance with the constitutional timelines.’[v] On the positive side, the muscles of a transformed Kenyan judiciary has been trained in the process of this implementation. Moreover, the implementation itself keeps the importance of following rules and procedures in the national conscience. Nevertheless, the new constitution is likely to raise tensions during the 2013 election through its creation of numerous political positions, county governments and quotas. These positions will be vied for by both newcomers and incumbents of the old system, without a clear sense of the procedures to be followed. For example, out of 347 expected incoming MPs, a minimum of 47 were to be women, a gender equality measure that had already been viewed as ‘technically impossible’[vi] by President Kibaki before going on to spark constitutional confrontation between the President and the Kenyan High Court over county commissioner appointments.[vii] The judiciary in Kenya has been able to show its new-found strength in the midst of such disputes but, given its necessarily slow response time, it is unlikely to comprehensively challenge unconstitutional practices that arise during the general election without sacrificing its non-partisan stance.

The third factor increasing tension is the presence of two political candidates due to begin trial at the International Criminal Court (ICC) in the month following the election. William Ruto and Uhuru Kenyatta are to stand at The Hague for crimes against humanity committed during the 2007/8 post-election period. The closeness of the beginning of the trial to the 2013 election means that allegations of electoral crimes past will inevitably be dragged into the campaign.

Ruto and Kenyatta have formed a partnership under the Jubilee Alliance and this means that if Kenyatta, as presidential candidate, wins the race to state house, it is likely he will find a way of abandoning the pair’s commitment to future ICC proceedings. This third area of tension thus reinforces the significance of the elections for Kenya’s political climate in years to come. The graph below shows January 2013 opinion poll results for the main political parties. 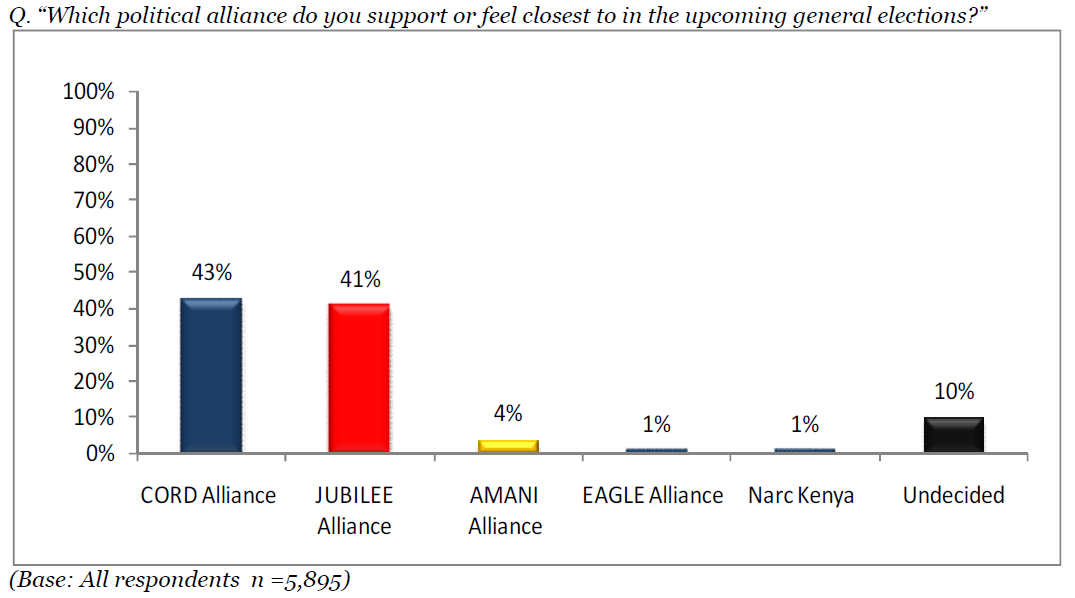 According to the poll, Raila Odinga, current Prime Minister and contender to Kibaki in the 2007 election, would be the first-placed candidate under the CORD Alliance (Coalition for Reforms and Democracy). However, given that his popularity is below the 50 per cent threshold for an immediate win, he would face a difficult and close second round contest against Uhuru Kenyatta. The likely outcome is deeply uncertain.

Crucial to the success of the Jubilee Alliance is the level of unity maintained in the coming weeks between Kenyatta and Ruto. Since Kenyatta and Ruto’s indictments by the ICC in 2011, the two have regularly appeared in public together, maintaining their innocence and spinning their prosecution as an international attack on Kenya’s sovereignty and a treacherous plot by Odinga. This rhetoric and turn of events has thus solidified an anti-Odinga position, forming an otherwise unlikely alliance amongst the two political candidates. When petitioning the UN Security Council to delay the ICC trial,[ix] Kenyatta, Ruto and Kalonzo Musyoka formed what came to be described as the “KKK” political alliance after the three ethnic groups the candidates are understood to represent (the Kikuyu, Kalenjin and Kamba, respectively).[x]This coalition was further solidified in the eyes of the electorate under a newer title, the “G7 alliance”. Asked on Facebook what the meaning behind “G7” was, the administrator of Kenya: G7 Alliance replied, ‘Kenya is divided into eight provinces. Do the maths. I could be wrong.’[xi] The meaning here is that the group brings together everyone who is not of Nyanza Province, the birthplace of Odinga and the home of Odinga’s core supporters of Luo ethnicity. Although there was at one point some rumour of a Ruto-Odinga alliance,[xii] which would have confounded the G7 alliance and swung considerable support in favour of Odinga’s candidacy, such political manoeuvring collapsed when Odinga was openly criticised by both Kenyatta and Ruto as lying when he said he supported a local tribunal to try ICC suspects.[xiii] However, despite this supposed unity between Kenyatta and Ruto, the Kamba element of the G7 alliance is not present in the Jubilee Alliance as Musyoka instead joined Odinga as CORD’s presidential running mate in late December 2012,[xiv] substantially deflecting an “all against Nyanza” framing of the election.

The proximity of these two electoral blocks is, nonetheless, likely to embitter the electoral campaign as candidates reinforce ethnic loyalties through hate speech and the possible organisation of violence. Despite being suspected of crimes against humanity by the ICC, Uhuru Kenyatta holds a three-fold unique position in the eyes of Kenyans: He is the son of independence leader Jomo Kenyatta; he is believed by many to be the richest man in the country; and he is considered a natural representative of out-going President Kibaki’s core ethnic region, the Kikuyu (the single largest tribe in Kenya). Kenyatta’s suspected role in the 2007/8 election violence was as the organiser of the Mungiki criminal gang[xv] but there is strong evidence that these criminal ties have been relinquished, most notably because the political wing of Mungiki has publicly declared support for Odinga.[xvi] However, because Kenyatta is due to stand trial in the month following the elections, this presidential race constitutes for him an all-or-nothing fight, which he needs to win if he is to avoid participation in the ICC process. A precedent for head of state refusal to comply with the Rome Statute of the ICC has already been set by President Omar al-Bashir of Sudan. But Kenyatta may have to go further than Bashir by also protecting his subordinate, Ruto, who is suspected of joining hands with Kenyatta on the understanding that he will achieve presidential protection against the ICC prosecutions if they win. Odinga’s chance of overcoming this electoral alliance depends in part on forming alliances with political and business groups concerned about Kenya’s international reputation if the Jubilee Alliance were to win. This election is thus a key touchstone for the country’s democracy. However the next few weeks pan out, a distinctly different Kenya will emerge to greet the world after votes are cast.

You can read part two of this post here.

[i] Leposo, L., ‘Kenya sets March 2013 election date’ (17/03/12). http://articles.cnn.com/2012-03-17/africa/world_africa_kenya-election_1_election-date-general-election-mwai-kibaki?_s=PM:AFRICA (accessed 25/07/12). Dates for the election have shifted back amidst political disagreements between President Mwai Kibaki and Prime Minister Raila Odinga but the March 2013 date is likely to hold fast, announced as it was by the country’s Independent Electoral and Boundaries Commission. Kariuki, A., ‘Kenya to hold polls in March 2013, says elections body’, The Citizen (18/03/12). http://thecitizen.co.tz/sunday-citizen/40-sunday-citizen-news/20754-kenya-to-hold-polls-in-march-2013-says-elections-body.html (accessed 25/07/12).

As Western withdrawal gains momentum, peace in Afghanistan hinges on one factor: Pakistan

Kenya: To the elections, and beyond (part two)

Dominic Burbidge is a DPhil candidate at the Department of Politics and International Relations at the University of Oxford. You can read his personal blog here

Kenya’s hopes for justice in the hands of the accused