Growing tension in Berlin. A proxy war in Korea. The escalating Space Race. The world—and particularly its realists—focused on the evolving great power competition between the United States and Soviet Union during the Cold War. However, in the shadows of this marquee battle, black leaders such as Kwame Nkumrah, Eric Williams, and George Padmore drove an anticolonial dialogue that sought to transform the international order on their own accord. Their core mission: to reframe sovereignty, reconceptualising it as self-determination and the elimination of racial hierarchy.

This weighty conversation, which took place from the 1950s to the 1980s, doesn’t seem related to an Asian meme war in 2020. However, amidst a new, growing Cold War between the U.S. and China, the ‘Milk Tea Alliance’ has emerged as the newest supranational dialogue to challenge international hierarchies.

The Origins of The Milk Tea Alliance

In April, Thai actor Vachirawit ‘Bright’ Chiva-aree mistakenly liked an innocuous tweet with cityscape images, which accidentally labelled Hong Kong a country. Pro-Beijing netizens noticed and took offence. The offence deepened when Chinese netizens found a post on Bright’s girlfriend’s instagram—her username: ‘nnevy’—where she claimed to be sporting the style of “a Taiwanese girl.” Pro-Beijing netizens and wumao (Chinese internet trolls, supposedly paid to express nationalist sentiments online) took to Twitter and Sina Weibo with the hashtag #nnevy (per her instagram handle) to demand an apology, glorifying China and insulting Thailand along the way.

Thai netizens were, however, unperturbed. Reflecting on the past ten years of coup, political division and uneven leadership, they responded with memes that displayed a mix of self-deprecation and wit. “Where is your king?” Chinese netizens wrote. “We don’t know either!” Thais responded. “We hate your Prime Minister Prayudh,” they trolled. In turn, Thai netizens jeered: “Say it louder, we agree!” Across the South China Sea, internet users from Taiwan and Hong Kong cheered for the Thai netizens, offering solidarity in the form of memes. Soon, an anti-China internet front was formed, christened the Milk Tea Alliance.’ 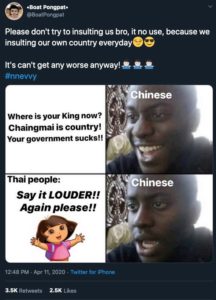 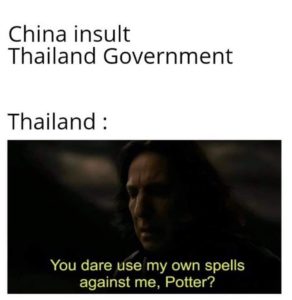 The alliance, which was formed entirely on social media, has proved remarkably durable. As the timeline below shows, it has developed into a meaningful anti-China and pro-democracy front. Prominent pro-democracy figures have bolstered the alliance, with activists Joshua Wong and Netiwit Chotiphatphaisal regularly tweeting about Thai-Hong Kong ties. Still, the ‘alliance’ has remained largely leaderless—inspiring anything from independently organized protests to viral tweets. 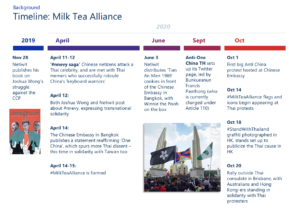 The odds of the Milk Tea Alliance ultimately succeeding may seem futile, especially amid the escalating conflict between the U.S. and China.

In Adom Getachew’s 2019 book on the rise and fall of self-determination, she casts anticolonial nationalism as “worldmaking” (Getachew, 2019, 2). Black thinkers at the centre of the decolonisation movement after World War II reinvented self-determination as a concept reaching beyond the confines of the nation-state, to insist that the achievement of this ideal required the involvement of international institutions. Central to this concept of self-determination was the view that empire was a form of domination that, in Getachew’s words, “exceeded the bilateral relations of colonizer and colonized”—an institutionalization of hierarchy that was distinctly international (Getachew, 3). This, in turn, required a “similarly global anticolonial counterpoint” to undo these hierarchies (Ibid).

The innovation of the Milk Tea Alliance is precisely this: it recognizes that the rise of Chinese empire is not merely a national institution but the creation of an international hierarchy of authoritarianism. Joshua Wong referenced this in October 2016, when he was detained in Bangkok’s Suvarnabhumi airport at the Chinese government’s request. “It is quite ironic; I am holding the passport of Hong Kong SAR, under China, while I use this passport to go to Bangkok, I can’t get any safety or security from China,” Wong related to Edward White of The News Lens. “It let me learn a lesson about the importance of freedom.”

As Thai Prime Minister Prayudh Chan O-Cha’s relationship has weakened with the United States, he has turned to China for infrastructure loans, submarines, and other weaponry. Similarly, Thai police have turned to their Hong Kong counterparts for inspiration for the use of Methylene Blue-laced water cannons to combat protesters. As one Thai netizen wrote, “I don’t know if Hong Kong is a part of China, but Thailand definitely is.” Like the Chinese tributary system of old, the authoritarian core supports the authoritarian periphery.

The power of the Milk Tea Alliance, then, is that it mobilises a similarly global anticolonial movement to Chinese and more generally authoritarian domination in Asia. In Thailand, the Anti-One China campaign organised protests at the Chinese Embassy in Bangkok, in solidarity with the recently jailed Wong and his two fellow Demosisto leaders, and to commemorate the Tian An Men massacre as an act of defiance. In Hong Kong, Wong continued to spotlight Thai pro-democracy protests. Just before his re-arrest, Wong tweeted: “The people from two places are facing similar difficulties while fighting for the same goal: that is, democracy and freedom.” International institutions like the UN and the ICJ are constantly called upon, although there has as yet been no response. 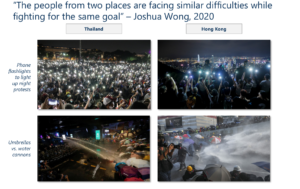 Pro-Democracy Solidarity in the 21st Century

Of course, there are important differences between black anticolonial movements and the Milk Tea Alliance today. The anticolonial movement was far more organised and top-down, a movement that took place as much in the antechambers of African parliaments as on the UN debate floor. Afro-Asian Presidents and Prime Ministers involved in the conversation were able to push forward a UN resolution; the Milk Tea Alliance, while in many ways more democratic and inclusive, has little pathway to direct impact on international institutions. Whereas black anticolonial worldmakers sought to eliminate racial hierarchy, the hierarchies the Milk Tea Alliance seeks to undo are largely political. Thailand, Taiwan, and Hong Kong do not fit cleanly into the umbrella category of the colonial, and their relationships with China are each different.

The nature of protest and supranational interaction has also evolved to fit the 21st century. Whereas the cross-national anticolonial dialogue was largely facilitated by the black intellectual elite, the international discourse of the Milk Tea Alliance has taken root in social media. It is the everyday Thai, and not just Thai leaders, who have taken to Twitter to vocalise their support for Wong.

The Milk Tea Alliance may still be in its formative stages. The anticolonial dialogue expanded beyond black thinkers to include Asian thinkers, culminating in the 1955 Bandung Conference. The Milk Tea Alliance is similarly beginning to attract worldwide attention. India has been mentioned as part of a ‘Masala Chai Alliance.’ Netizens also incorporated Ryazhenka, a traditional fermented milk product of Belarus, into a broader alliance of pro-democracy milk products. Belarussian protesters responded by using chants and flags from the Hong Kong protests.

Great power competition today offers its own set of headlines. A new American president. Re-creation of international institutions. In the shadows again, a new generation of supranational worldmakers—bound together less by milk tea and more by a satiating desire for democracy—will mount a new challenge to hierarchy and demand a new reconceptualisation of sovereignty. Whether China will recognize the power of this new alliance remains to be seen.

Jasmine Chia is a candidate for the MPhil in International Relations at the University of Oxford. She is a contributing writer for the Thai Enquirer.

Scott Singer is a candidate for the MPhil in International Relations at the University of Oxford. His thesis focuses on how terrorism exposure influences public opinion and voting behaviour and its broader implications for terrorism and counter-terrorism strategies.