What is the United Nations (UN)? What does it do and how does it do what it does? Together with Sam Daws, 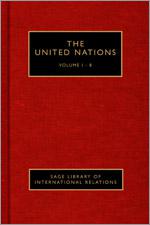 Throughout the collection, we were keen to showcase the different parts of the UN system, not just its structures and programmes, but also the various actors who make up what is often lazily referred to as “the UN”: member states, staff and the host of groups – NGOs, academics, private sector companies, foundations, regional organisations, etc. – with which it works. We also wanted to emphasise the many identities of the UN. It is regarded, variously, as a stage for countries to debate and decide on collective action, a provider of global goods, and as the world’s moral barometer, symbolised by its Secretary-General.

That said, it is valuable to talk about the UN system as a whole. It represents our most recent – and most enduring – experiment in global governance, as a place for states to convene, as the setter of international norms, and as a provider of key services, from emergency relief to human rights monitors and peacekeepers. The fact that people around the world expect the UN to deliver (which is why they are, so often, disappointed when it fails); the fact that we now expect states to work collectively on global problems; the fact that almost every aspect of human endeavour and planetary resource is addressed by international laws or bodies – all this reflects the transformative impact of the UN on our world and our lives. The story of the UN is more than that of its constituent parts. It is the story of the international community.

I would separate your question into two parts: the most urgent area in need of reform, and what is most needed to meet the challenges of the 21st century. On the first, I would like to see the UN focus on where it can really add value, on the unique functions that it fulfils. Given its ever expanding to-do list and the huge resource challenges it faces this is not only sensible but necessary. In my view, member states should put emphasis on areas such as mediation and let the UN step back from traditional development and humanitarian assistance, as plenty of other actors are now involved in this work – state agencies, NGOs, local communities, foundations and companies. It would be fantastic if, over the course of the new Sustainable Development Goals agenda, the UN could become the world’s biggest training outfit, building the capacity of other actors so that they can absorb its duties. The UN could then focus on being an enabler, and on providing extra or specialist capacity when it is needed. This will be incredibly difficult to achieve – development reform has eluded the UN for many years because it is so political. But now is the time. How can we have a new development agenda without appropriate means to deliver it?

On the second, the short answer is: political will. That, unfortunately, is not something that UN officials can conjure! But an independent and visionary Secretary-General could help. This was very much the impetus behind UNA-UK’s role in co-founding “1 for 7 Billion” – the global campaign to improve how the UN selects its chief. The next Secretary-General must be able to convey to governments – and people – that the line between global and national challenges has disappeared, that even traditionally domestic problems like job creation now have an international dimension, and that an effective UN is therefore in everyone’s national interest. Above all, we need someone who is able to work effectively with the big powers, to help them resolve their differences or at least put them aside when global cooperation is urgently needed.

We spent a long time agonising over how to organise this collection! We considered traditional approaches but also more creative ones that recognised there are no neat divisions between the so-called “three pillars” of the UN, such as a focus on crises – humanitarian, security, political and environmental – or on prevention, straddling human rights, development and so on.

In the end, we opted for something in between, mindful that the volumes needed to be as intuitive as possible for readers. So the second set features three volumes – Conflict and Crisis, Rights and Justice, and Poverty and Development – that roughly translate into peace, development and human rights, but that take a broader view of what these areas encompass, with issues such as arms control, humanitarian assistance and transitional justice covered. We felt that a dedicated volume on the environment and climate change was necessary. Climate change is the existential challenge that we face. Big power conflict is arguably the only other, but that, thankfully, is not a certainty. And environmental issues are now part of the backdrop, if not mandate, of most UN bodies.

As for the concept of pillars, I think it has symbolic value in communicating what the UN’s building blocks and priorities are. And there is some utility to the categorisation in organisational terms. But a top-level shift in thinking may spur progress towards the elusive goal of coordination. I like to speak about peace, sustainable development and human rights as interwoven strands in the UN’s DNA.

Even the UN’s fiercest critics are unlikely to deny that the need for global cooperation – be it on mass displacement, terrorism, trade or climate change – is now greater than ever and likely to grow. That is certainly not an optimistic view of the future but one that implies a corresponding need for an effective UN.

The development of a rules-based global order has delivered stability and prosperity for many states and people. This is particularly true for the West, but most countries have cooperated to maintain the integrity of the international system. Today, this period of relative stability appears to be fraying. Many now believe that the international system is no longer able to deliver for them. Strained to breaking point, it will not endure unless governments consciously will it to last, and actively work to improve it, so that people everywhere have a stake in its survival. Political leadership, however, remains trapped in national agendas. The capacity – and willingness – of the international community to prevent and resolve any number of global challenges is faltering.

The UN remains the only organisation with the reach, remit and global legitimacy to tackle these problems. Its success, however, depends heavily on states’ willingness to work together, and across the world, governments have been turning inwards in a ‘race to the bottom’ of narrowly-defined national interest. International compromises, of the kind that made the establishment of the UN possible, still appear too costly. The patterns of polarised thinking that led to the breakdown of relationships before the First World War are starting to be recognisable again. Today, we have the UN as a tool to prevent such a breakdown. But unless governments – and the publics to whom they are accountable – embrace the need to use, strengthen and improve our global organisation, we will not succeed. I hope that all your readers will support us in this quest: www.una.org.uk

Natalie Samarasinghe is Executive Director of the United Nations Association – UK (UNA-UK). She is the first woman to hold this role. She speaks and writes regularly on UN issues, and has produced a number of publications, including the eight-volume SAGE Major Work on the United Nations, which she co-edited with Sam Daws. In 2013, she co-founded 1 for 7 Billion, the global campaign to improve how the UN selects its Secretary-General, which has led to a more transparent and inclusive process.

Genevieve Woods is a former staff member at the United Nations Association - UK (UNA-UK). She is a foreign qualified solicitor and will be commencing practice as a barrister in London in 2016. Before joining UNA-UK, she worked at Salvos Legal and in the Faculty of Law at Sydney University. Most recently, she worked as an assistant to the Chief Justice of the Federal Circuit Court of Australia. She holds a double degree in Arts/Law from Sydney University and a Masters of International Human Rights Law from Oxford University.