We interviewed Raphaël Lefèvre about his new book Jihad in the City: Militant Islamism and Contentious Politics in Tripoli, available now.

OxPol: What motivated you write your book?

Raphaël Lefèvre: I wanted to shed light on a little-known historical event with large contemporary echo: the creation by a militant Islamist movement of an “Islamic Emirate” on the city of Tripoli, Lebanon in 1982-1985. This movement has modern parallels​ with the “Islamic Caliphate” created by ISIS in parts of Iraq and Syria after 2014 and with similar attempts by Al-Qaeda to create “Islamic Emirates” on the territories it has sporadically controlled recently, from Southern Yemen and Northern Mali to Northern Syria. I am not suggesting that the 1982-1985 “Islamic Emirate” in Tripoli was a precursor to ISIS and Al-Qaeda. But, by researching this historical episode extensively, I explain how mini-states implemented by militant Islamists work from within – and I account for their many shades of grey. 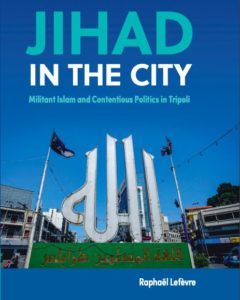 OxPol: What finding did you find most striking when you did research for the book?

Raphaël Lefèvre: One of the things that struck me most from the ethnographic research on militant Islamism—which I conducted in Lebanon—was the disconnect between, on the one hand, the assumption in much of the media and academia that these movements are homogeneously driven by religion or ideology and, on the other hand, my own observation that many of the militants were driven by other motivations and did not always behave in ways consistent with militant Islamism. By conducting extensive research for this book, including interviewing dozens of former militants, I was able to get to the bottom of why a range of people join militant Islamist movements: out of ideological conviction, in many cases, but also out of a will to express dissent, a thirst for revenge, a drive for money, or a way to prevail in local conflicts. Behind militant Islamism lied a diverse phenomenon.

OxPol: What other themes, besides militant Islamism, will the reader gain insight into from reading your book?

Raphaël Lefèvre: Writing this book about why and how a militant Islamist movement took over Lebanon’s Tripoli in the early 1980s is also a way to better understand the overlooked history of this city of 500,000 inhabitants. It is the story of a city which, for over a millennia, was organically linked with Syria but was then detached from it and incorporated into Lebanon during the French Mandate in the 1920s. From then on, it began suffering from intense social, economic and political grievances, which fuelled the rise of myriad militant movements—including, in the 1970s and 80s, Islamist ones. It is also the more specific story of a chain of extremely violent events which shook the city in 1982-1985 and, from street clashes and assassinations all the way to actual battles and even true massacres, cost the lives of 3,600 locals. Finally, telling this story not only sheds light on Tripolitan history but also on overlooked aspects of Middle Eastern politics involving Syria, Fatah, and Iran.

OxPol: How did you do conduct your research for this book?

Raphaël Lefèvre: Doing research on events which happened in the early 1980s was not an easy task, both because some of the episodes of violence that took place then remain very controversial in Tripoli and because quite a few of the main protagonists have died—and not always of natural causes… So I ended up spending three full years doing research, splitting my time between months-long stays in Tripoli doing interviews with some of the remaining eyewitnesses of this period of history and Beirut, where I conducted archival research into the records of Lebanese newspapers of that time. At the end of the day, I had way too much research material for a book, with several hundred pages of interview notes and archival records, which made the analysis lengthy and the writing process arduous. But it also meant that I could fill the book with the sort of local details which may, at first glance, seem excessively granular yet, taken together, allowed me to yield broader insights and forge new concepts.

Jihad in the City: Militant Islamism and Contentious Politics in Tripoli can be found at the Cambridge University Press, on Amazon, or at independent booksellers.

Royal Archives That We Pay for but Aren’t Allowed to Read: A Brief History

Raphaël Lefèvre is a Senior Research Fellow in the Department of Politics and International Relations at the University of Oxford. Before moving to Oxford, he was a Research Fellow at the Carnegie Endowment for International Peace’s office in Beirut, where he published on Middle Eastern politics and Islamist movements and conducted extensive fieldwork, including dozens of interviews with Islamist militants.

Islam and the Arab Awakening: Five things we should know about the Libyan and Egyptian demonstrations