The young(-ish) have spoken. What now?

When Teresa May announced her snap election last April, she not only ruined my Roman holiday, but also made me cringe about having written a blog in the immediate aftermath of the Brexit referendum in which I had encouraged just that, namely: “Go with Dignity – Call a Snap Election!”

Why? By then I had accepted the prevailing wisdom that the Conservatives would win a landslide victory, providing them with a three-figure majority in the Commons. This would have given her the popular mandate to push through Brexit in the ‘hardest’ possible form, thus nullifying any chance for a second ‘in-out’ referendum on the outcome of the Article 50 negotiations, which I had by then advocated in “The Will of the People: A Primer in Direct Democracy.”

The main fallout of last July’s referendum for me personally was that it managed to create yet another division – on top of the geographic and socio-economic divides – by pitting the younger generation against their elders. An article in The Independent asked  the pertinent question:  “Young people – if you’re so upset by the outcome of the EU referendum, then why didn’t you get out and vote?” Indeed, my worry was that without the opportunity to seek redress, the younger generation would be further alienated from politics, at serious cost for all of us.

By calling the snap election, the prime minister inadvertently gave the youth that opportunity. The rest is history. News headlines from across the political spectrum showed that the youth responded to The Independent’s challenge in no uncertain terms:

While writing my initial blog, I strongly agreed with Nick Clegg that the snap election must be held before any attempt is made to activate Article 50, so that the newly elected Parliament can scrutinise the government’s specific plan. Only then should a vote of consent by MPs be held on whether Article 50 should be triggered.

This was not to be: Article 50 was recklessly triggered before the snap election. We now urgently need to explore options of how to avoid ‘no deal’ in light of the “youthquake”[1]—or, maybe more accurately, the “young-ish quake”[2].

With the UK government dropping its insistence on parallel negotiations of the Article 50 ‘divorce’ and the post-Brexit deal on the first day of the negotiations, it is highly unlikely that there will be enough time to negotiate a bespoke post-Brexit deal before 29 March 2019, when the UK is scheduled to leave the EU. The next EU Parliament elections are scheduled for 2019, and the current seven-year EU budgetary framework ends in 2020. This makes it very unlikely that the remaining 27 EU member states will (unanimously) agree to extend the Article 50 negotiations beyond that deadline.

So, what scenarios might prevent a “hard” or “cliff-edge” Brexit in the absence of a deal?

Plan A. Retraction of the Article 50 trigger

Legally speaking, it is not altogether clear whether the triggering of Article 50 could actually be retracted. However, recent statements by the European Council President Donald Tusk and French President Emmanuel Macron suggest that this option is at least politically open, and it stands to reason that politics supervenes in this case. However, it is unlikely to happen because it would require either a new UK government elected explicitly on the promise to retract, or a second in-out EU referendum, by the end of next year.

Nothing is impossible, but at present even Her Majesty’s Loyal Opposition is split on the issue, with Jeremy Corbyn still intent on leaving the single market (although this could also change given his newly found cult status among the younger generation[3]).

Given that time is running out for a bespoke, tailor-made deal before the Brexit deadline, we will simply have to content ourselves with an off-the-peg solution, with some alterations for a better fit to be negotiated after the deadline.

In my opinion, the least disruptive off-the-peg solution is for the UK to associate itself with[4] or alternatively rejoin the European Free Trade Association (EFTA) – of which it was a founding member – in order to remain in the European Economic Area (EEA). This appears to be an option for some the existing EFTA members, at least according to some tabloids, and as Dan Roberts put it in The Guardian: “if there is no political consensus in Britain for how to proceed over Brexit, this is perhaps the lowest common denominator. At the very least it could serve as the basis of a transition arrangement.”[5]

However, I do not subscribe to the “transition” terminology: On 29 March 2019, the UK will cease to be member of the EU. There is no further “transition” – at least if the term is understood as a transition from being in to being out of the union. The deal is the deal we will have to live with on 20 March 2019. But it need not be the final deal.

In all likelihood, negotiations about alterations would have to be made, for example, in the context of freedom of movement. Indeed, that may prove to be less problematic than seemed to be the case in the immediate aftermath of the Brexit referendum, as recently suggested by Nick Clegg in the Financial Times, and reported even by the UK tabloids.

The shock of the Brexit referendum has had a profound effect on EU member states with respect to the fundamental reforms needed for the EU not only to survive but to thrive. Several options for such a reform have been mooted since. Bruegel, a Brussels-based economics think tank, for example, recently put forward a  proposal for a continental partnership that “would consist in participating in goods, services, capital mobility and some temporary labour mobility as well as in a new system of inter-governmental decision making and enforcement of common rules to protect the homogeneity of the deeply integrated market. The UK would have a say on EU policies but ultimate formal authority would remain with the EU. This results in a Europe with an inner circle, the EU, with deep and political integration, and an outer circle with less integration.” The idea of a “two-speed” or “multi-speed” Europe is nothing new, of course, but it has gained currency after the Brexit referendum.[6]

In evaluating Plan B, it is important to keep in mind one, if not the key, obstacle in bringing about such a multi-speed model in the past: the UK. The prevailing British attitude in that respect was admirably satirised in an exchange between Jim Hacker, the fictional Minister of the Department of Administrative Affairs and his Permanent Secretary, Sir Humphrey Appleby, in episode five of Margaret Thatcher’s favourite sitcom Yes Minister! (first aired on 24 March 1980, seven years after the UK entered the European Economic Community, or EEC): 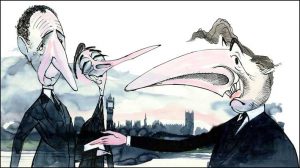 With Brexit, the multi-speed model has become a more viable option for the EU. Of course, it will take time to negotiate such a model, and no doubt that will also involve negotiations on the relationship with EFTA/EEA members. As such Plan B, with EFTA/EEA as the UK post-Brexit starting point, would tie in well with the overall EU reform. Indeed, the outcome of the negotiations between EFTA and the EU might be such that EFTA members, including the UK, would feel comfortable to (re-) join this re-modelled EU (in the “non-core/federal” tier).

So, there may after all well be another UK EU referendum on the horizon, but not one on leaving, but one on joining a reformed European Union.  I for one feel confident that with the now energized young-ish vote this would have a fair chance of success.

[3] “Labour MPs are beginning to detect signs of a shift in their leader. “I suspect he loves his new-found popularity more than he hates the EU,” says one. Mr Corbyn is already under pressure from the trades unions and his own MPs to leave open the possibility of staying in the single market and customs union. He may find it harder to ignore the wishes of the Glastonbury crowd.”[Corbyn’s fans are in the dark about Europe]

[4] The Swiss foreign policy think-tank Foraus has published an interesting proposal regarding a UK associate membership of EFTA as (interim) solution.

[5] Indeed, in his most recent piece, Roberts claims that “UK civil servants are now said to be presenting ministers with a more binary choice: accept political compromises similar to aspects of the European Economic Area (EEA), or settle for a much more limited trade deal such as the recent EU-Canada free trade agreement (CETA).”

[6] “A multi-speed formula will shape Europe’s future: The best option is a structure with an integrated core and a looser outer layer“

On the Margins: Meetings to Watch at the Hamburg G20

The young(-ish) have spoken. What now?