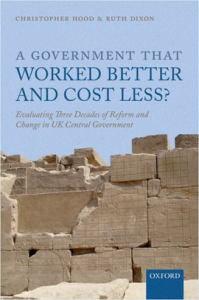 Cost Less? Evaluating Three Decades of Reform and Change in UK Central Government’ which recently won the 2015 Louis Brownlow Book Award from the US National Academy of Public Administration.

Mainly because the UK is so commonly said to have been one of the earliest and most enthusiastic adopters of NPM-style reforms since the 1980s – indeed, long before that phrase was coined by one of us in the late 1980s to denote a set of loosely related ideas about government and public service reform that stress themes such as active public management, measured performance outcomes, disaggregation and competition in public services. We don’t say that the UK is necessarily representative of all countries attempting NPM reforms – far from it. What we do say is that it’s a highly significant case internationally.

For several reasons. Picking up on our first answer, readers interested in public service reform internationally will want to understand the ‘critical case’ of the UK. Second, the themes the book explores – what government machinery costs to run, how it performs on indicators of fairness and consistency – are of universal significance. Third, we know of no other studies that carefully trace out what happened to these things in a government system over three decades or more. Nor do we look only at UK central government: we make careful comparisons of the devolved administrations of the UK with the traditional ‘Whitehall’ departments and assess whether local government did better than central government (spoiler alert: it did not).

At least three lessons. First, if governments are truly interested in reform they should resist the temptation to keep changing the official statistics on which reform performance is measured. We found that categories and definitions often changed so frequently that the data breaks got in the way of scoring performance consistently over time. Second, at least some of those measures should enable us to compare the performance of governments of different political stripes. We chose ‘valence’ measures that were independent of ideology and hard for managers to influence. Third, if they want to cut costs, governments should focus on the bottom line rather than being fixated on any one component of costs. Over the period from 1980 to 2010 numbers of civil servants were cut by over a third – ostensibly to cut costs – but the costs of hiring civil servants did not fall at all in constant-price terms, and overall running costs continued to rise. So the pursuit of headcount reductions may have distracted successive governments from focusing on other costs such as IT contracts, consultants and advertising.

The coalition government’s first Spending Review in 2010 set an ambitious target to reduce running (administration) costs by 34 per cent in real terms by 2014-15. Just before the 2015 election they claimed to have met or even exceeded this target. As far as we can tell, the coalition’s focus on reducing consultancy and other ‘non-payroll’ costs resulted in larger reductions in running costs than we saw in any five-year period during the previous 30 years. But the coalition’s running cost numbers are extremely hard to compare with the costs data reported in our book because in 2010 the Treasury substantially changed the definition of such costs, putting a different set of organizations into the count and reclassifying as ‘programme costs’ large sums previously listed under ‘administration.’ When we attempted to compare like-for-like based on the coalition’s new definitions, we did not find such dramatic reductions in the administration costs of most of the central Whitehall departments.

We concluded that the data breaks and inconsistencies that we encountered were more a result of genuinely trying to ‘modernize’ indicators than to cover up failures. And of course there is no point continuing to collect obsolete measures such as the number of candles required to light government offices. But some indicators that were published year-after-year (and classified as ‘National Statistics’ – that is, certified by the UK Statistics Authority) such as government administration costs, nevertheless were so difficult to compare over time due to changing definitions that they were not genuine time-series. This may perhaps have suited some Sir Humphreys but we also encountered civil servants who were frustrated that more consistent series were not available on which to base management and policy.

Of course, others, such as the National Audit Office and the Institute for Government’s Whitehall Monitor team also hold the government to account by scrutinizing reform initiatives against such data as is available. Our distinctive contribution was to look at government costs and performance over a much longer timescale than had been attempted before and we believe our own study will contribute to transparency and accountability through our unique publicly-available compilation of consistent long-term time-series of official data.

The ‘death of NPM’ has been announced frequently over the past twenty years, but the underlying ideas remain surprisingly resilient. We expect many of the concepts associated with NPM such as active management, public accountability through performance measures, and a strong focus on cost, will remain important for some time to come.

Argentina Elections: Let's change, but not too much

Julián López-Murcia is currently conducting his doctoral research at Oxford, which deals with the question of how to characterise and account for ‘recentralisation’ in Colombia between central and lower levels of government from 1994 to 2014 and addresses a wider literature on subnational politics in Latin America. Follow @JulianLopezM

Christopher Hood is Gladstone Professor of Government Emeritus and Emeritus Fellow of All Souls College, Oxford. He specializes in the study of executive government, regulation and public-sector reform.
@C_C_Hood