Argentina Elections: Let’s change, but not too much

The election of Mauricio Macri, leader of the Cambiemos (“Let’s Change”) coalition, to the presidency should not be seen as yet another shift in Argentina’s policy pendulum. Over the past decade the Nestor and Cristina Kirchner administrations pursued an ambitious program of state intervention, which included expansive social policies, subsidies for consumers of public utilities, and the nationalization of former state-owned oil company and the pensions system. These policies continue to enjoy wide support. Yet there is also a consensus that the macroeconomic imbalances inherited from Kirchnerismo need to be addressed. Macri’s mandate is therefore not one for state retrenchment, but rather for better management of state intervention. Can his administration pull it off?

Macri inherits a challenging economic scenario. In the absence of access to international financial markets, the Kirchners found several means to finance their interventionist policies. The first was inflationary central bank financing of the fiscal deficit. Private estimates set inflation at 25% and fiscal deficit at 7% of GDP. The second means was squeezing out dollars from the agricultural sector through increases of taxes and quotas on commodity exports. This led to a highly conflictive relationship between the state and the rural sector, which has recently opted to hold back its production as a way of boycotting the government strategy. The third means was placing a “clamp” on dollar acquisitions. This resulted in two exchange rates, an official rate and the black market rate. The current difference between these exchange rates is 50%, which generates opportunities for arbitrage and speculation.

Macri’s economic team has announced several measures to address these problems. The first is putting an end to the clamp and unifying the exchange rate. They propose an increase in the value of the official exchange rate to near the value of the current black market rate. Because most prices are already being set according to a $13 or $14 peso-dollar exchange rate they reason that this should have a limited effect on the real economy.

The greatest risk of putting an end to the clamp is the potential surge in the demand for dollars, which could deplete the Central Bank of the few reserves it has left. The Macri government has two options for obtaining dollars in the short-term. The first is to continue the currency swaps with China pursued by Cristina Kirchner. To this end, Macri’s economic team has planned a trip to Beijing. The second is eliminating taxes and quotas on agricultural exports. Macri’s economic team estimates that the rural sector is holding on to anywhere from 12,000 to 16,000 million dollars in exports, which would be released once pro-rural policies are in place.

Another set of measures aim to tame inflation. Lowering inflation is necessary to add credibility to the peso and lower demand for dollars. Argentines buy dollars not just to pay for imports, but in order to defend their savings in the face of inflation. The government perceives that curtailing public spending and lowering the deficit is key for stabilizing the economy.

Macri’s ability to carry out these reforms ultimately lies in politics and here public opinion may be a more binding constraint than either Congress or key interest groups.

The minority status of Cambiemos in both Chambers of Congress will certainly condition the political viability of its economic agenda. Yet, the Argentine policymaking process may provide more room for legislative coalition building than what the nominal seat distribution would suggest. Argentine legislators respond less to their partisan affiliations than to the preferences of provincial governors. This subnational allegiance turns policy making into a vertical coordination game between the governor and the President. Cambiemos can exploit this game to build plurality in the Lower Chamber via alliances with to governors from provincial parties such as Movimiento Popular Neuquino, Frente Cívico (Santiago del Estero), and even Frente Renovador (Misiones). Equally plausible is for Cambiemos to obtain legislative support from dissident Peronist legislators from several provinces such as San Luis, Córdoba, Santa Fé, Chubut, and La Pampa. The Senate will present a more uphill battle, but the overrepresentation of small provinces may also allow Cambiemos to build support for its main ambitious projects by striking deals with provincial governors.

Ultimately, the success of Cambiemos’ vertical coalition making efforts will hinge on the fiscal negotiations with the provinces. Last week, the Supreme Court of Justice ruled against the de facto centralization of revenues implemented by the Kirchners. This ruling created an unexpected political hurdle for Macri, who will have to negotiate with the provinces a new fiscal pact. This negotiation could ultimately provide Cambiemos a platform to obtain support for its economic agenda.

An intervening factor that could work in favour of Cambiemos is the ongoing leadership transition within Peronism. The party’s centre of gravity is tilting away from Kirchnerismo, and towards more moderate elements. Given the current economic challenges, the short-term incentive of the key Peronist players, is to cooperate with Cambiemos and establish themselves as responsible leaders. The same logic applies to Massa, whose party controls a non-trivial number of Congressional seats and has already signalled to Cambiemos his willingness to cooperate.

Macri’s relationship with key interest groups also indicates that he could build support for his economic reform programme. Cambiemos enjoys strong ties to big business in both industry and agriculture. As Belen Milmanda and Hernan Flom note, the expansion of the soy frontier increased the political pay-offs of pro-rural policies. Cambiemos has also taken strong initiative to appease labour by announcing that it will raise the income tax floor, a long-standing union demand.

Public opinion may present a more binding constraint. Argentines are strongly in favor of the signature statist policies of kirchnerismo. Figure 1 clearly illustrates this point drawing data from the first wave of the Argentine Panel Election Study. It reveals substantial agreement for different interventionist policies that were adopted during the last twelve years. The level of support is consistently high, and shows little difference across voters of the top three candidates. Such a strong statist consensus may be the most long lasting consequence of Kirchnerismo. 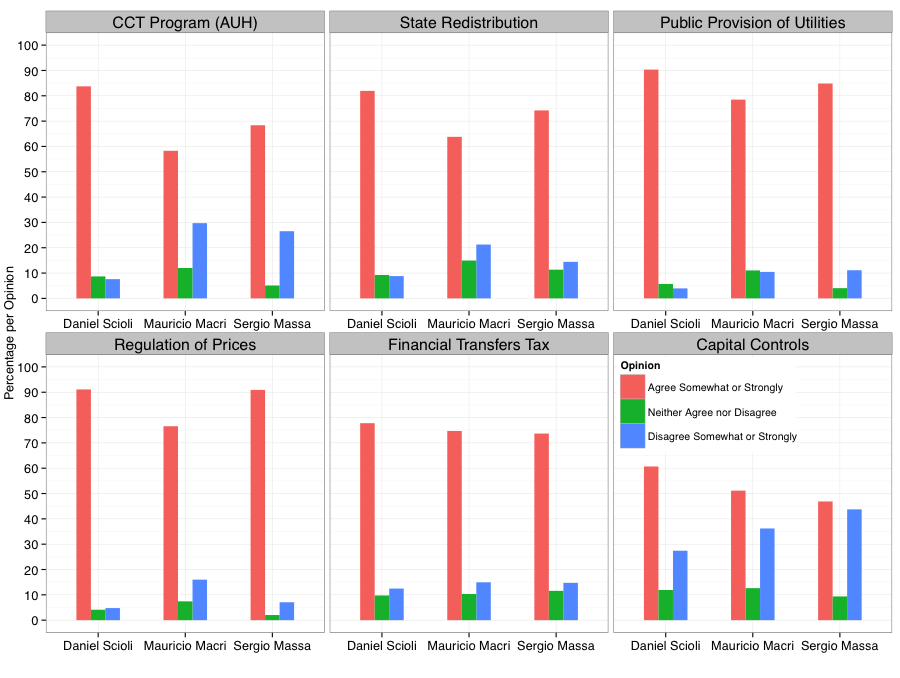 The Cambiemos leadership is well aware of mass preferences. During the campaign, Macri went out of his way to communicate that signature Kirchnerista policies would stay in place under his administration. Despite the aggressive attempt from the Peronist camp to frame Macri as a neoliberal, citizens believed his centrist shift. And there is no indication that the new government will renege on its campaign pledge in the short term. Macri and his future ministers have committed to achieving macroeconomic stability without compromising any progressive policies. The government will maintain programs that benefit consumers such as Precios Cuidados and Ahora 12 which, respectively, regulate prices of basic foodstuffs and subsidize low credit fees. Even the sizable reduction of subsidies to public utilities announced by the new Energy Minister, will be targeted to high-income areas. These policy commitments put additional fiscal pressure on Macri’s government.

MP expenses and their assessment in the media: Towards a more informed analysis

Jazmin Sierra is an Associate Member of Nuffield College, University of Oxford. She earned her Ph.D and M.A. in Political Science from Brown University and a B.A. in International Studies from Universidad Torcuato Di Tella. Jazmin studies comparative and international political economy with a regional focus in Latin America. Her research interests include the political economy of global production and innovation, state-business relations, and development finance. Her research has been funded by the Social Science Research Council (IDRF-SSRC) and the Watson Institute for International Studies and has been published in Comparative Political Studies.

Luis Schiumerini is a Postdoctoral Prize Research Fellow in Politics at Nuffield College, University of Oxford. He earned his Ph.D. and M.A. in Political Science from Yale University and a B.A. in Political Science from Universidad Torcuato Di Tella. Luis studies the operation of democratic representation in developing countries, with a focus on Latin America. He is working on a book manuscript that investigates why incumbency is an advantage in some Latin American countries but not in anothers. In other ongoing projects he studies the connection between repression and protests, and the origins of preferences for redistribution. Luis has also served as electoral analyst for the Office of Electoral Affairs of the City of Buenos Aires, and as consultant for CIPPEC on incumbency advantage in the Argentine Provinces.

Argentina Elections: Let’s change, but not too much