Crossrail, still trumpeted as the largest construction project in Europe, and once held up as a paragon of a well-run, on-time and on-budget development, is now late and seriously over budget. Praise has been replaced by political infighting as the blame game gets into full swing and warnings that this will further imperil Transport for London’s (TFL) already shaky looking finances.

However, hidden beneath the debris of mismanagement is something much worse: the willingness of the British government to plough vast sums into transport in London, whilst simultaneously underfunding transport in the rest of the country.

Across the UK public transport has been de-regulated and privatised under policies originating in the 1980s, yet, London is a treated as a special case. London is unique in having a government body responsible for public transport: TFL. The city also tends to have far cheaper public transport than the rest of the country and far higher levels of per capita funding from public source.

Explaining these patterns is difficult. It is in part a feature of devolved government. Public spending on transport in Scotland is high because the Scottish government has chosen to fund it at higher levels than the rest of the country. This accounts for some of the differences, but far from all.

Some of the differences are driven by local geographic and historic context. Northern Ireland, for example, never had as dense a railway network as the rest of the country as railway construction started much later, and so it is little surprise to see such a small amount spent on the railways, though this of course does not explain the overall low per capita spend. The North East, South West and East all have low population densities which prevent the creation of a dense railway network since there are few population centres which can support light rail – though it should be noted that Newcastle, one of just three cities in the entire country to have a light rail system, the others being London and Glasgow, is in the North East.

The House of Commons report, from which the data were extracted, gives three potential explanations for the regional disparities: that transport supports commuters who may live in one region and work in another, that the data is affected by individual large projects such as Crossrail, and that ‘a greater proportion of people travelling in and around the capital will rely on public transport [than in the other regions], with commensurately higher spending levels being required to provide this service’. None of these explanations stand up to scrutiny.

The commuter argument sounds reasonable, certainly thousands of people commute into London every day, many of whom live in other regions. However, a very large number of them live in the South East, the region of England with the second highest public spending on transport and railways. If the per capita figures were recalculated on the basis of where people work, instead of where they live, it is highly likely that the South East would put greater distance between itself and any third region, and London would undoubtedly retain its position.

Certainly, projects like Crossrail severely alter the landscape of public spending on transport, and for many years. However, what other region ever receives such major projects? Crossrail comes hot on the heals of Thameslink, and may well be succeeded by Crossrail 2. The only transport projects of comparable size and scope in recent decades have been High Speed 1 and High Speed 2. These projects all have benefits for other regions, but undoubtedly have large – probably the largest – benefits for London. In short, the argument that major infrastructure projects distort the figures is only relevant if these projects are rare and if they are distributed across regions. They are neither.

The one positive that can be taken from these arguments is the clear recognition that public transport needs public spending. The report admits as much in its defence of high spending in London. If public transport requires support in London, the wealthiest and most densely populated region, then it is entirely fanciful to think that private initiatives will make up the deficit in the rest of the country.

The United Kingdom faces many socio-economic challenges – as all states do – but a core problem that successive governments have inadequately addressed, or ignored, is that London is too big, or to put it another way, the rest of Britain’s cities are too small.

Instead of continuing to pour public money into London, which widens that gap with all others, efforts should be made to build a counterweight. The idea of a Northern Powerhouse is a sensible one – the conurbations of Liverpool, Manchester, Leeds and Sheffield have populations roughly equal to that of London, but are isolated by woeful roads and rail links. Public transport in these cities is also inadequate – none have a light rail network.

An ambitious series of infrastructure projects to develop new transport links would undoubtedly improve the economies of all four, would attract private investment, and reduce North-South migration which disproportionately leads to the young and educated leaving. The prospect of Northern Powerhouse Rail, to develop new East-West train links, is welcome, but needs to be backed fully, should be prioritised, and should be based around significant and permanent increases in public spending on transport outside of London.

Patrick Tiney is a DPhil International Relations candidate at the University of Oxford whose academic work focuses on major power relations, international order, and international security.

Brexit has accelerated, not caused, government’s weakening power over parliament 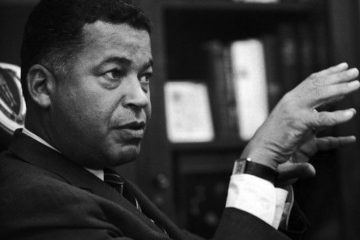