On November 17th, 2018 large crowds began blockading roads around France dressed in the high-visibility yellow jackets that all French cars must store. Their initial demands focused on stopping a new fuel levy introduced to reduce carbon emissions and raise money for investments in renewables. However, this has not been the French government’s only problem: a recent survey has suggested the French are the most pessimistic people in Europe seeing little hope in the future either for themselves or the country, hate crime has risen dramatically, and, remnants of the Yellow Vests continue to organize violent demonstrations around the country. This toxic combination has left the government of Emmanuel Macron with little room to manoeuvre and, as his most recent project ‘the great national debate’ has shown it may be difficult for him to maintain the broad coalition of voters that elected him in 2017. Both the mass protests of the Yellow Vests and the response to them shows the limits of direct democracy as a way of resolving the crisis of legitimacy in Western societies.

The rapid growth of the Yellow Vest movement took the French political establishment by surprise. A number of political groups ranging from the far left to the radical right claimed that the rise of the Yellow Vest movement was evidence that not only had French voters turned away from Macron but also spontaneously endorsed their respective political perspectives. In truth, the vast majority of yellow vest protesters did not vote for Macron in 2017 and either supported the far-right, far-left or abstained. Furthermore, the movement was not as spontaneous as many supposed, with the French Newspaper Le Monde reporting that there had been multiple attempts to organize a mass protest on Facebook over the previous few months. These events had attempted to mobilize people over a number of issues but was only successful when it turned to fuel taxes.

As protests continued the French Government quickly relented, abandoning the fuel tax and raising the minimum wage. While this may have pacified the moderates within the Yellow Vest movements hardliners continued to protest. However, their lack of coherent policy demands and, the protesters’ suspicion of formal politics limited the group’s appeal and ability to achieve further successes. This led to the protests became increasingly violent with a focus on vandalizing state property and harassing intellectuals such as Alain Finkielkraut – an event that was widely seen as anti-Semitic. While to an outside observer it may seem irrational to continue protesting once your demands have been met however, the writer Elizabeth Wood argues that people often choose to rebel or protest because of the ‘pleasure of agency’, the idea that the transformation from powerless and alienated citizen to a empowered and connected activist is reason enough for people to protest and that this ‘pleasure’ gives citizens power that they are not willing to relinquish after their demands have been met.

To counter this Yellow Vest uprising Macron announced a ‘great national debate’ which would take the form of multiple town hall debates around the country where any citizen could raise issues of concern or personal importance. The debate was divided into four broad topics: democracy, living standards, environment and taxes. Over several months hundreds of town hall meetings were conducted across the country with the results being recorded in large books before being taken to the Élysée palace for examination. The results suggest that the French want lower taxes, less bureaucracy and better connections between Paris and French regions. However, the public reaction to the debate was overwhelmingly cynical with a poll taken before the program even began suggested that 70% believed that the debate would not change anything. Furthermore, the debate was criticized from within and without with the director of the program resigning arguing that it was little more than a PR exercise, while a group of intellectuals assailed the debate both for refusing to discuss Macron’s signature policy of reducing taxes for France’s wealthiest citizens and, at the same time for failing to singularly focus on the issue of climate change.

Despite the cynical view the majority of French voters take of Macron’s Great Debate the President has decided to double down on his experiments with direct democracy and redemptive politics. Macron has proposed the introduction of direct ballot initiatives like those in the US and has argued for the greater use of referendums in deciding public policy. Furthermore, the President has announced the closing of the ENA an elite school designed for training the French political class as part of a desire to narrow the division between the ‘elite’ and the ‘people’. These proposals may have some effect, and along with the minimum wage increases are likely to improve his standing with left-wing moderate voters. However, proposals for more referendums will give the radical right and radical left more opportunities to undermine him and his agenda.  Furthermore, while Macron’s popularity has improved slightly in recent weeks likely due to the end of the Yellow Vest protests and a decline in unemployment, other polls have suggested only 13% of French voters are positive about their country’s future. This is toxic for a country’s political system, as voters who are pessimistic about their country’s future are twice as likely to vote for extremist parties.

The political theorist Margret Canovan suggested that democratic politics has two faces, the pragmatic face embraces stability, peace and moderation whereas the redemptive face focuses on the power of citizen and the popular sovereignty of ‘the people’. Canovan argues that a failure to embrace the redemptive face of politics has led to an imbalance which, is responsible for much of the decline of public trust in democratic institutions across the West. However, as both the Yellow Vests and the Great Debate have shown the redemptive face of democracy often does not live up to its promise, rather being empty and vacuous. Most often it is the tool not of the losers of representative politics but of those who chose not to take part in a representative democratic system, as it allows citizens to protest against policies and ideas rather than for anything. Furthermore, if movements like the Yellow Vests continue to reject any form of formal organization, policies or political ideology individuals within and outside the movement are free to interpret it as they wish. On the other hand, the state is unable to truly access this redemptive side of politics because of a lack of trust on the part of citizens.

French voters have made it clear that they are unhappy with where France is now but, they have also expressed their dissatisfaction with anyone who has attempted to reform the system: the previous two Presidents both only served a single term. This lack of trust between politicians and voters cannot be solved by politicians alone. While the French political class needs to readdress imbalances in society, French voters must also break out of their cynical torpor.

Thomas Brewis is an MPhil student at St Hugh’s college whose work focuses on the radical right and Nationalist movements in different political systems across Europe. His current research project looks at the relative success of radical right parties in both majoritarian and consociational political systems, notably France and Austria. His previous research projects have dealt with Russian revanchism in the near abroad and the status of minorities in Eastern Europe.

American Conservatives in Crisis?: a Q&A with Oxford’s Gillian Peele 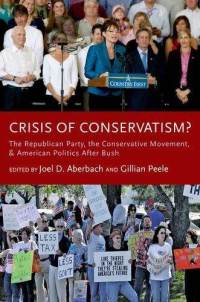