On 15 January, President Vladimir Putin called for a “greater balance between the branches of power” as he announced significant changes to the Russian constitution. On the same day, Prime Minister Dmitry Medvedev and his cabinet resigned and were quickly replaced. The new Prime Minister, Mikhail Mishustin, was a relatively unknown figure in Russia until recently, having previously spearheaded digital modernization efforts as head of the Federal Tax Service.

The surprise changes are seen as preparation for the Putin’s departure from the presidency in 2024 given current constitutional restrictions, which prevent him from being president more than two consecutive terms. The proposed constitutional reforms would not facilitate his return to the post in the future, however, but instead propose to weaken the presidency and strengthen other bodies of the state. The current version of the bill would give new political appointments powers to Parliament, the Prime Minister, and the State Council, an advisory body chaired by the President which serves to coordinate between state bodies.

While many experts suspect the amendments will provide a pathway for Putin to circumvent the constitution and rule for the remainder of his life as head of the State Council, the move also provides measures for longer term solutions to the autocrat’s succession dilemma. In personalistic or ‘plebiscitary’ authoritarian regimes such as Russia, the stability of the system is extremely reliant on the singular figure of the president, and is therefore brittle and prone to breaks in the face of leadership changes. Yet like many ageing leaders, the 67-year-old Putin seeks to protect the legacy he has sought to build over two decades, especially in upholding the stability he is attributed as bringing to Russia after the economic chaos of the 1990s. Putin is clearly aware of the legacy challenges facing any autocrat who leaves politics permanently, commenting recently that “It would be very alarming to return to the situation of the 1980s, when [Soviet] state leaders, one by one, remained in power until the end of their days, each without providing the necessary conditions for the transformation of power.”

What, then, are the ‘necessary conditions’ Putin has in mind? Some analysts have suggested that Putin is interested in following the example of Nursultan Nazarbayev, Kazakhstan’s first and only president until 2019. Nazarbayev resigned formally, but oversees the ‘managed’ transition of power as chairman of the Security Council. Although the constitutional reform’s empowerment of the State Council opens up this path for Putin, it is not an option without problems. Nazarbayev’s continued role in foreign and domestic policy makes it unclear whether the Kazakh transition has begun in earnest and whether it will continue on as smoothly after Nazarbayev’s passing. Elites’ uncertainty over the future remains, and little has been done to mitigate the personalism and patronal politics which make autocratic transitions of power so complicated in the first place.

Putin may realize that micro-managing his own transition from power is not enough to ensure its smooth procedure, and that enshrining a legacy of stability is a much more involved task than merely appointing the right yes-man to be his successor. Indeed, if a legacy of stability is something Putin truly seeks to engrave into Russia’s history, more concrete insurance is needed in the form of strengthened institutions that are able to function independently without the direction of a super-president.

By empowering institutions, Putin would be left with more leeway to pick a future president neither as politically calculating nor as capable at manipulating elite networks as himself. While perhaps surprising that an autocrat such as Putin would want to depersonalize a system he spent two decades consolidating around himself, his firing of Medvedev shows the Russian president is apparently willing to sacrifice longstanding allies in favour of stability. Throughout his fourth presidential term, Putin has appointed more and more technocrats in the stead of friends and political partners, showing a trend toward a more professionalized bureaucratic government.

Putin thinks his long and hard rule is justified because he does not trust his allies; as one insider stated, “He thinks things will collapse without him”. Yet as the long Putin era approaches its end, it is becoming evident that his choice is between total trust of one successor, or partial trust of a few. Correcting the balance of power in Russia could enable more accountability between branches of the state such that each is less able to abuse the others or lead the whole country astray singlehandedly. Coupled with the appointments of more impersonal bureaucrats, the Russian state could evolve to be more predictable and democratic, resolving differencesthrough official institutional channels, rather than through corruption and coercion.

Despite these potentially positive developments, it is important to note that the constitutional amendments would keep key powers over appointments, dismissals, and general policy direction within the presidency, and it is still unclear how the changes will play out in practice. Exemplifying neither outright constitutional abuse nor genuine political reform, the constitutional changes may yet usher in a new era for Russia or bring about much more of the same. While the real nature of Putin’s final bequest to Russia is yet to be revealed, it is already clear that President Putin is making sure his legacy will be remembered for generations to come.

Ellen Leafstedt is a first-year MPhil candidate in Russian & East European studies at St Antony’s College, Oxford. Her research interests are in the idea of legitimacy in authoritarian states, focusing on nation-building and the social contract in Russia and Kazakhstan. 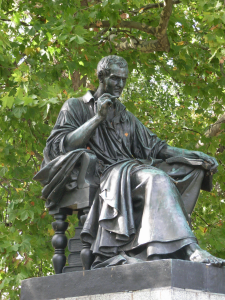