COVID-19 has hit European citizens dramatically, not only creating a general risk-driven environment with a wide array of economic vulnerabilities but also exposing them to pervasive digital risks, such as biosurveillance, misinformation, and e-democracy algorithmic threats. Over the course of the pandemic, a debate has emerged about the appropriate techno-political response when governments use disease surveillance technologies to tackle the spread of COVID-19. Citizens have pointed out the dichotomy between state-Leviathan cybercontrol and civil liberties. Moreover, the giant technological flagship firms of surveillance capitalism, such as Google, Amazon, and Facebook, have already assumed many functions previously associated with the nation-state, from cartography to the disease surveillance of citizens. But particularly, amidst the AI-driven algorithmic disruption and surveillance capitalism, Smart City Citizenship sheds light on the way citizens could take control of their cities, and not vice versa.

Unlike the nation-state governance, smart city governance has opened up a plethora of factors, such as data devolution, in which citizens might take a more prominent role in reorienting ongoing implementations. Moreover, in light of the giant technological flagship firms of surveillance capitalism, such as Google, Facebook, and Amazon, assuming many functions previously associated with the nation-state protecting citizens’ digital rights has become a key aspect for many Algorithmic Nations in the digital age (Calzada, 2018). As such, Smart City Citizenship shows the way in which Algorithmic Nations—defined as non-deterministic city-regional and techno-political conceptual assemblages—probably will emerge driven by data sovereignty (Hummel et al, 2021).

This book presents nine intertwined key ideas that systemically show a methodological path stemming from action research to follow for both academics and practitioners as a techno-political route for smart citizen action from the social innovation perspective as follows:

The demise of democracy is clearly already one of the biggest policy challenges of our time that urgently requires deconstructing the aftermath of the extractivist models’ negative externalities affecting pandemic citizens. So far, the smart city term has been hegemonically used by policymakers as a top-down mainstream model without deeply questioning any techno-political assumptions that it implied, which is very much related to inner process of datafication and further exacerbates at present algorithmic disruptions that affect citizens’ post-COVID-19 daily life.

Consequently, in post-COVID-19 societies, unplugging or being offline is a nearly unaffordable privilege that very few dare to attempt. Potentially, the opportunity to be offline has been rarely considered to be valuable so far.

Therefore, deciphering the smart city mainstream technocratic approach requires a distinction between the hegemonic techno-centric smart city approach and the new ongoing alternative intervention approach, known as experimental city. This is a deep transition that aims to blend the interdependencies between various stakeholders to better re-align power relations and outcomes. It goes without saying that smart city policy implementations not only have reduced the interdependencies among stakeholders to technocratic public-private-partnership (PPP) models but also have failed to question the identities of strategic stakeholders and how they uniquely prioritise their business and social models.

As a result, the book suggests democratising the smart city by rethinking multi-stakeholder helix strategies to ensure the complete democratic representation of diverse voices from each helix. Particularly, it proposes explicitly moving from the Triple and Quadruple Helix models towards a Penta Helix model, where social entrepreneurs, activists, bricoleurs, brokers, and assemblers play an important role as transformative intermediators resulting in a wide range of business and social models: (i) Direct public Provision, (ii) PPP, (iii) Public-Private-Academic partnership, (iv) Public-Private-Academic-People partnership, by reaching out (v) Urban/Data Commons as the highest degree of experimentation.

The fifth intertwined key idea refers to the given mainstream policy understanding of replicating urban solutions from city to city. The book suggests reverting the mechanistic and solutionist approach by adopting a mutual learning rationale among cities by establishing the City-to-City-Learning programme.

The six intertwined key idea focuses on the institutional and techno-political configuration of different city-regions devolving data to citizens. Insofar as data are contextual, this chapter examines how four city-regions (two in the UK, Glasgow and Bristol, and two in Spain, Barcelona and Bilbao) dealt with data governance models. In the post-General Data Protection Regulation context, citizens’ data security and ownership ultimately needs to be protected by localising personal data via grassroots innovation and platforms and data co-operatives. Data, as a public good, should be devolved and brought back to citizens.  As such, Data Devolution schemes through multi-level governance models should be implemented onwards.

The seventh intertwined key idea demonstrates that unpacking the ownership of data and its governance structures and dynamics within their citizenries is as important as the collection, storage, and usage of data in AI-driven cities. As one of the core case studies of the book, Barcelona leads this way by formulating policies that consider citizens as decision-makers rather than data provides by commoning their data.

As a result of this, we reach the eighth intertwined key idea: Protecting. This chapter argues that there is a need to establish pan-European Data Infrastructures and Data Institutions (collectively as Data Ecosystems) to protect citizens’ digital rights in Europe.

Ultimately, the book ends with Resetting. Against the odds, pandemic citizens are beginning to develop new ways of responding to the COVID-19, through mutualising and donating data using data altruism/donation, including the creation of platform and data co-operatives. Nonetheless, the book leaves one pending and open point for further research: It remains to be seen whether platform-based alternative urbanism, such as platform and data co-operatives (among other data governance models), could revert extractivist data governance models by establishing a feasible and sustainable pathway onwards to foster further democratic citizenship. 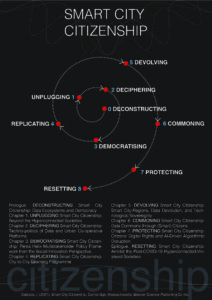 Smart City Citizenship can be found at:

Dr Igor Calzada MBA is a Research Fellow at WISERD at Cardiff University School of Social Sciences being funded by the ESRC. In addition, he is Senior Research Affiliate at the University of Oxford, Future of Cities Programmes and Urban Transformations ESRC at COMPAS, where he joined in 2012 being funded by the EC-H2020, ESRC, EU-Marie Curie, RSA and Ikerbasque. From 2019 to 2021 he has served as Senior Scientist for the Joint Research Centre (JRC), Digital Economy Unit and Centre for Advanced Studies at the European Commission. He is currently serving as Senior Advisor of UN-Habitat Programme while being Invited Senior Lecturer at the University of the Basque Country and Mondragon University. Over the last 20 years, he has been working in several international HEI (Strathclyde, Aston, Nevada, Vrije, Ikerbasque, and Mondragon Universities) and worked as director in the private sector, i.e. Mondragon Co-operative Corporation and in the public sector, i.e. Basque Regional Government.